Digiflavour are looking to make bigger waves in the vaping market with their new kit.  But does the Edge kit provide a kit for you too or is it easily missed?

If you weren’t aware already, Digiflavour is Geekvape under a different name.  Predominantly known for rebuildables, the Edge kit is the first real regulated device on the market from them.  Boasting all he bells and whistles that you would expect from Geekvape, combined with added wireless charging capabilities, the Edge is looking to stand out on its own and put Digiflavour firmly in the sub ohm regulated market as well.  However does the mod benefit of not having the Geekvape tag on the front or is there a reason why Digiflavour claim ownership to this kit?  Before we get into all of that, let’s get into the details first. 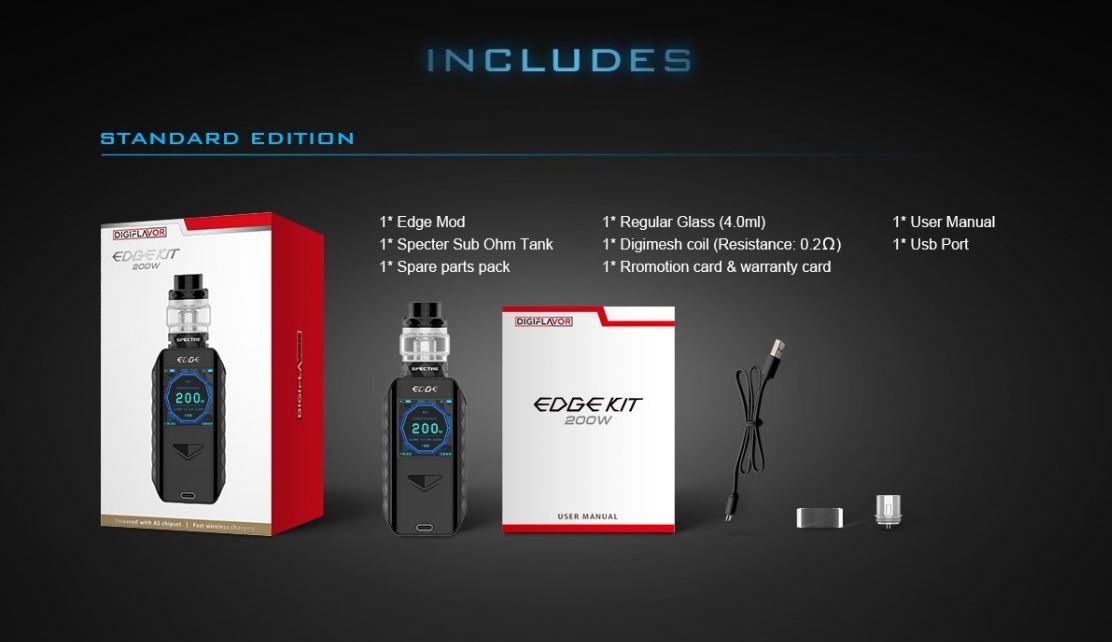 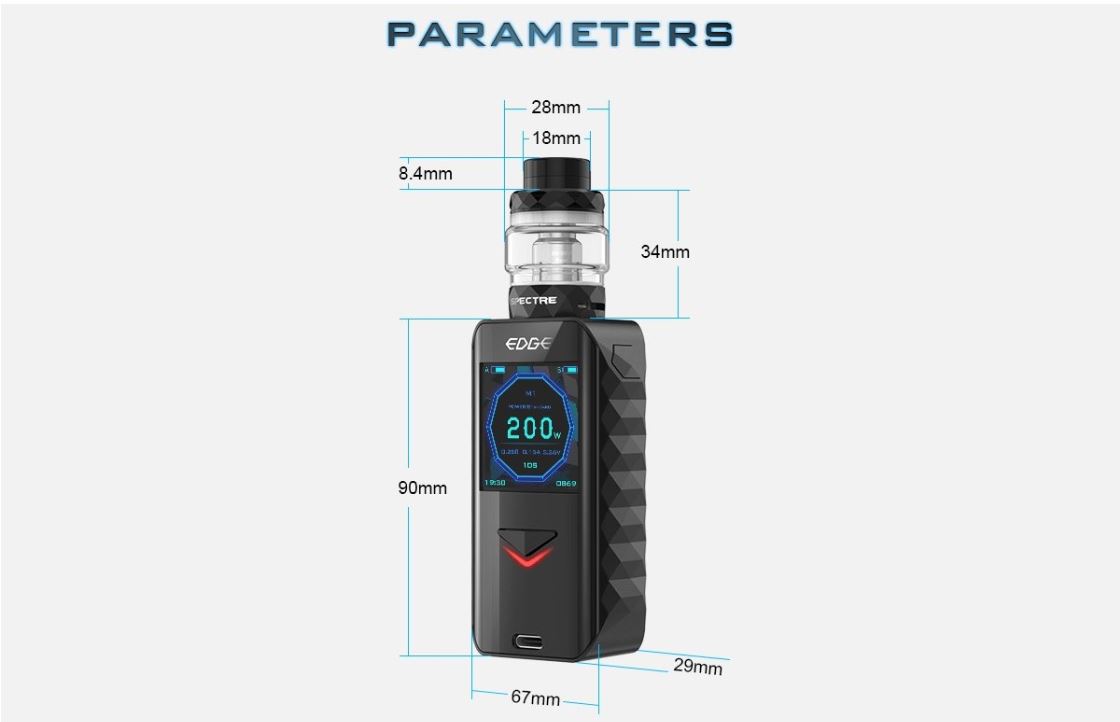 About the Digiflavour Edge Kit

The Edge kit is a dual 18650 device powered by the Geekvape AS Chip-set capable of firing up to 200w and comes with compatible wireless charging technology.  The mod is a box style device with slanted corners slightly heavier than in comparison with the Nova.  It has a big colourful screen and a back battery panel with a button release on the bottom of the device to secure the door in place.  The top holds a centralised 510 spring loaded connection to add to the ergonomics of the design.  The fire button is a small hexagonal button featured on the top right on the right hand side of the device USB port and navigation buttons situated underneath the screen on the front.  3 clicks of the fire button takes you into the menu system and 5 clicks shuts the device on and off.  The menu system is a simplified option system similar to the Nova allowing you to change mode (power/NI/SS/TI/TCR/VPC/Bypass), memory choices, and pre heat settings only within the screen.  The screen itself contains all the information as a result with watts/temp, mode, pre heat mode, ohms, 2 battery indicators, amps, volts, puff counter and seconds all filling the screen.  Finally the device is compatible with wireless chargers including the official Digiflavour charger (sold separately).

The Spectre tank is a 5 mil capacity sub ohm tank that comes with mesh coils as standard.  It has a replaceable 810 drip tip on top with bottom adjustable airflow and a screw off top to reveal 2 fill holes underneath.  The coils come in rated at 0.2 for the X01 recommended between 30-90w and are single mesh coils The tank is 25mm and has a 510 pin as well. 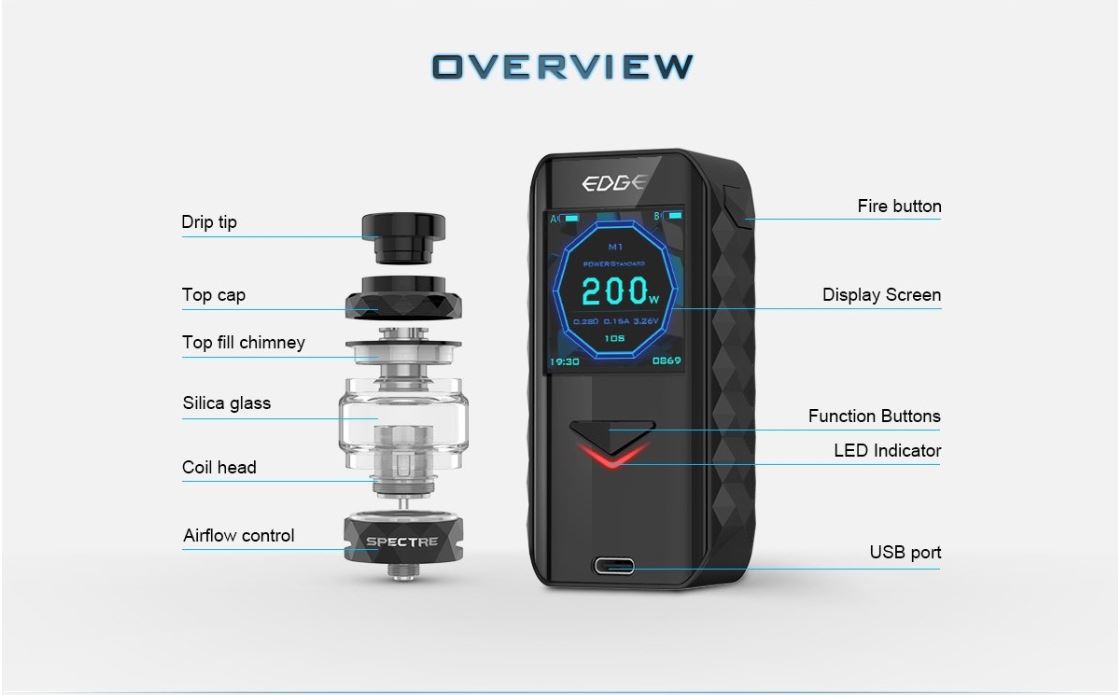 Using the Edge kit over the past week or two I have grown rather attached to it if I am being honest, it certainly does what it does really well.  The design of the device is very simple but seems to work really well feeling really comfortable in the hand.  The fire button especially is a big pro for me, I was unsure that first but it feels naturally placed and actually reduces the issue of accidentally firing due to the placement and stiffness of the button.  The screen is really lovely, a big blue display that despite the abundance of information, looks nicely spaced out with the wattage being the stand out visual feature as you would expect.  Firing on the mod is extremely quick, with the AS chip set proving yet again to be one of the best on the market.  It fires accurately and even the temperature control performs really well, especially with the TCR/VPC options provided.   Turning the device on and off is very quick with only around 2 seconds to do either which in lack of a lock device function, makes it extremely efficient and practical which is always a good thing as well.  I love the battery door design as well, very easy to do and combined with the battery ribbon inside, the device is really easy to change batteries on the go compared to some devices that require clasps to be secured, for example the Aegis legend.  Battery life is pretty good as well for a dual 18650 device, coming in at around over a day or so of heavy use so is comparable to the Drag 2 and Nova.

The spectre tank that comes packaged with the edge is honestly one of the best kit tanks I have come across for performance.  I have been using many different liquids through the coil both sweet and different ratios and at nearly 2000 puffs as of now, the coil is still giving out plenty of flavour and brilliant performance.  So the coil does perform really well and gives a nice solid flavour with is a rare thing to see from a kit tank.  I love the top fill design of this, about a third of a turn to release the top so again very easy to do.  There is plenty of airflow that feels natural at wide open with plenty of room to adjust where needed.  Juice consumption is pretty good as well, with the coils performing well into the bottom of the capacity with no dry hits whatsoever, so you will get a full use out of each 5 mil tank. 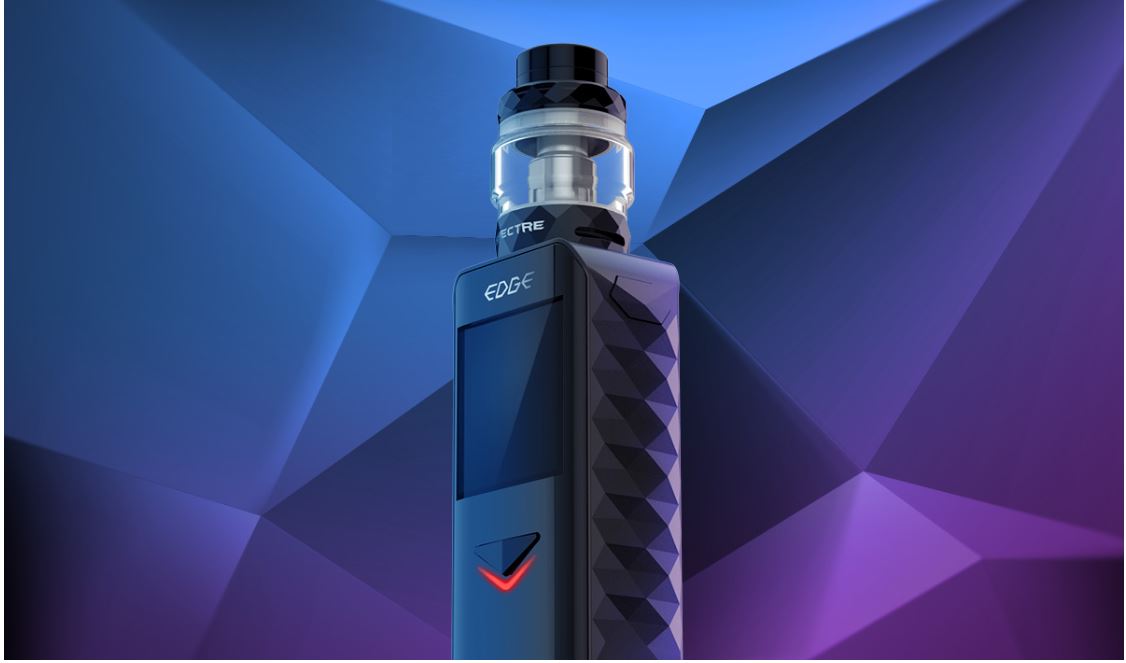 In terms of the Edge, there really isn’t many flaws I have found with the device to be honest, it performs really well.  The front did gain a scratch easy which is not a common thing for a device in my experience so perhaps the front is prone to some wear and tear.  The weight of the mod for its size may be a con for some people as well but I never really found it to be a bad thing in my own experience.  The fire button can be occasionally hard to press, especially when shutting the device down but again this is only on the odd occasion.  Other than that, there isn’t anything negative I can say about it.

The Spectre tank although being a really well performing tank isn’t the best on the market for flavour.  It does give a nice flavour with subtleties but overall it won’t be a tank to find on its own accord.  This just means that as a kit, the tank will serve you really well but it does lack the wow factor that tanks such as the alpha has by itself.  Juice consumption is pretty high as well I have found, even with thicker liquids.  So despite its efficiency with utilising the full capacity, you will find yourself filling it up at least once more a day compared to other tanks.  Again other than that, there isn’t anything else I can fault the tank on.  Perhaps the drip tip being a little short for some people. 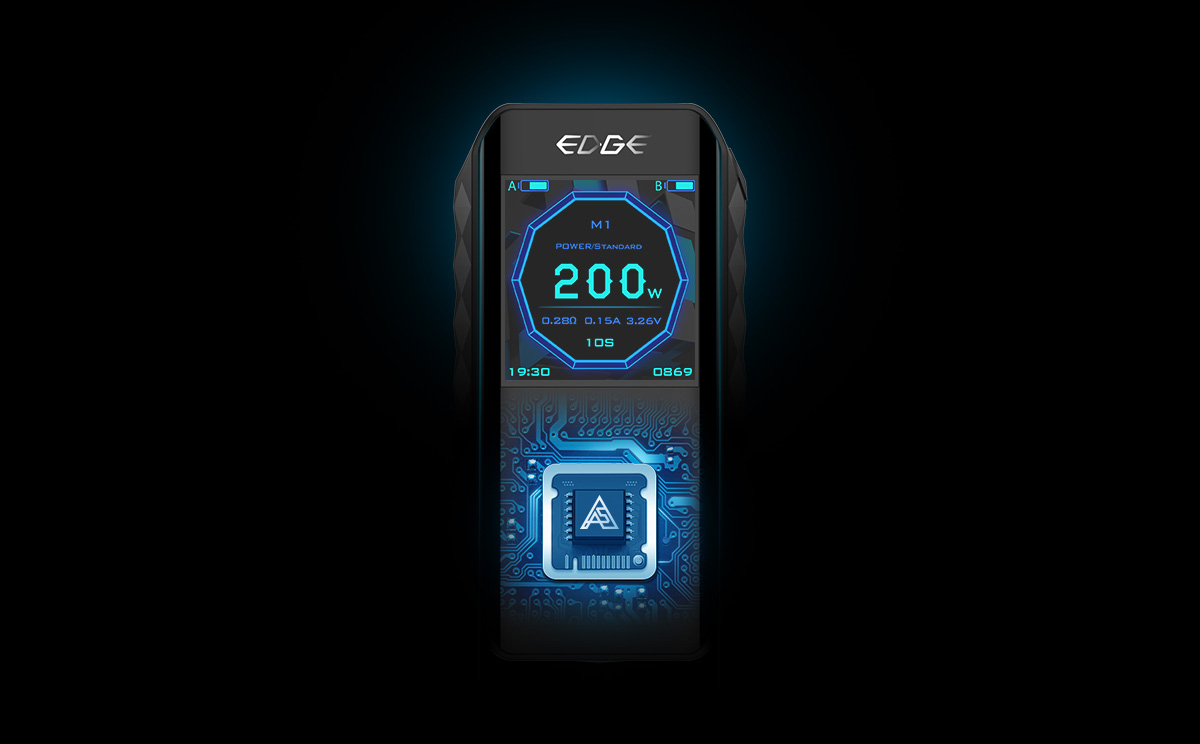 Honestly, I have been looking for a kit that potentially matches the likes of the Drag 2 for both quality and performance and potentially this is that kit, as early as January!  The edge kit is a fantastic piece of kit that if it carried the Geekvape name, would not look out of place.  Providing quality and performance and seemingly getting everything right, it has actually replaced the Drag 2 on daily use which is a big statement considering I have used the Drag for 3 months pretty much.  This could well be Geekvape’s finest mod to date outside the Aegis range, so with it carrying the Digiflavour name it could well establish them alongside their parent company as among the best on the market today.  I chose not to pick up the wireless charger due to battery safety but potentially an internal battery mod bringing this technology could well be a very interesting idea indeed, for now the Edge remains potentially one of the best kits of the year and the best released so far.

Digiflavour may not be a name on everyone’s lips but the Edge kit will go a long way to change that.  Potentially an early contender for best kit of the year, the Edge is that good.

The Digiflavour Edge may be sold on the wireless charging capabilities but don't let that hide the fact you get both an excellent performing mod and a really well performing tank. This is comparable to the big hitters for quality, what we have come to expect from Geekvape.

UK Vape Deals is the biggest UK Vaping deals blog website where the public find and list the cheapest & best Vape Deals, discount codes and vouchers for E-Liquid and vape products for May, 2020 from around the UK. All  the latest vaping deals in one place. UK Vape Deals does not sell products direct, each product is sold by various businesses that offer exclusive and non-exclusive deals. Please click on links at your own risk. Come and grab some Vape Bargains today.