What is the iJoy Avenger

The Ijoy avenger kit is the new mod and tank from IJOY featuring a world’s first voice command technology.  It features a mesh coil tank, intuitive voice commands to control the device and it looks great as well.  However under the hood, how well does the Avenger really perform?  Before we get into it, what do you get in the box?

Whats in the iJoy Avenger Box 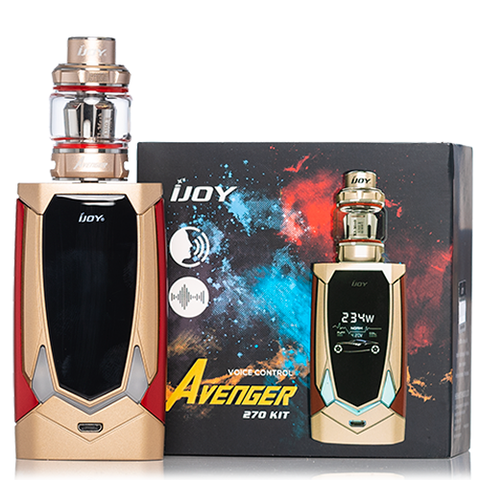 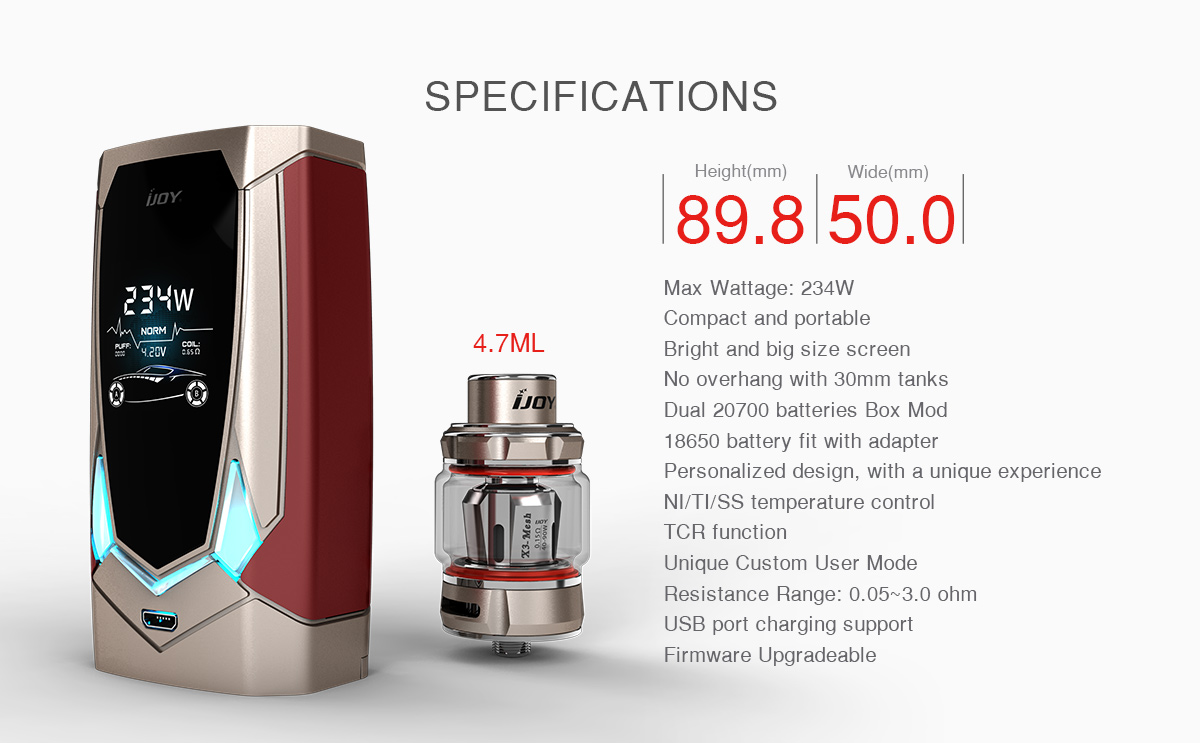 The Avenger tank was first released by itself before being packaged with the Avenger mod so the tank was designed as a stand alone product originally compared to other kit tanks.  The capacity of the tank holds 4.7 mils of liquid in a slight bubble glass design with a 3.2 mil standard and tpd 2mil option available also.  The tank is a 25mm tank with 510 pin and 810 drip tip which is replaceable.  The fill system is a top fill with a screw off lid and large filling holes either side of the chimney for a pour fill design.  The tank has bottom airflow rings which are adjustable and comes with a standard sub ohm look as featured in most tanks.  The coils however are the stand out point of the tank with coils similar with the falcon in terms of wood pulp and cotton to increase flavour and wicking potential.  With the mesh wood pulp design you do get a coil similar to other mesh and the flavour and vapour is wonderful, especially around 80w, with the coils not too thirsty and combined with the large 4.7 mil glass, enough to keep going for a while.

The Avenger mod is something entirely in its own field, as advertised the first voice controlled Vaping device.  The mod is a 234w mod, with a side fire button and two navigation buttons with LEDs installed for the design.  The screen is a large colour screen with car design which includes battery indicator as wheels.  It displays volts, wattage, resistance and puff count around the car.  The device as mentioned has two LED lights which light up with customisable colours within the menu system and has a battery hinge door at the bottom.  It comes in a range of colours as shown with the tank matching the mod in the kit.  the mod is compatible with 20700 batteries and also 18650 with the rubber sleeve provided in the kit.  The menu system provides limited options for mode (4, power/temp/rcp/tcr) and preheat, light colour/control, and the option to turn off lights or voice.

Colours of the iJoy Avenger 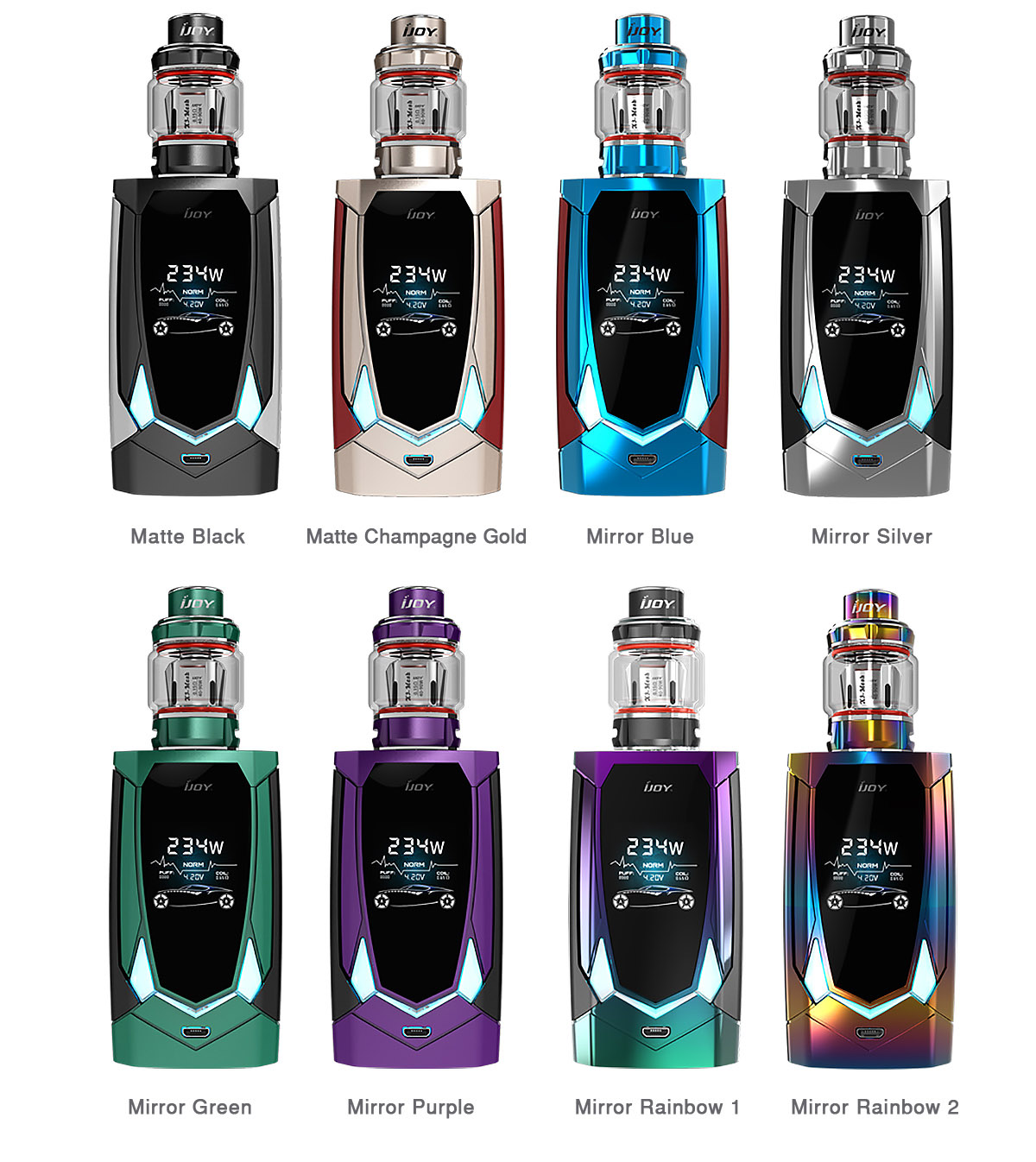 Thoughts on the iJoy Avenger

So what do I think about the kit?  I will tank about the tank and then the mod seperately.  First of all the Avenger tank, it is in my opinion , conditionally a really good tank.  The mesh coil is full of flavour and it runs the likes of the falcon and fireluke mesh standard tank quite close for flavour.  the vapour production is lovely and the capacity combined with the liquid usage is pretty good for a sub ohm tank.  You wont be filling it up as often as other sub ohm tanks usually do.  The drip tip feels nice and I have had minimal to no leakage when using the tank.  The one thing I did find with the mesh coil is that a slight dry hit when the liquid gets low doesn’t seem to go away in my experience.  There is no dry hitting whilst using the tank but I found once the coil dropped low, there was a taste that never went no matter how strong a liquid I used.  However this can be remedied by simply keeping the tank topped up, as mentioned you won’t get that taste otherwise. 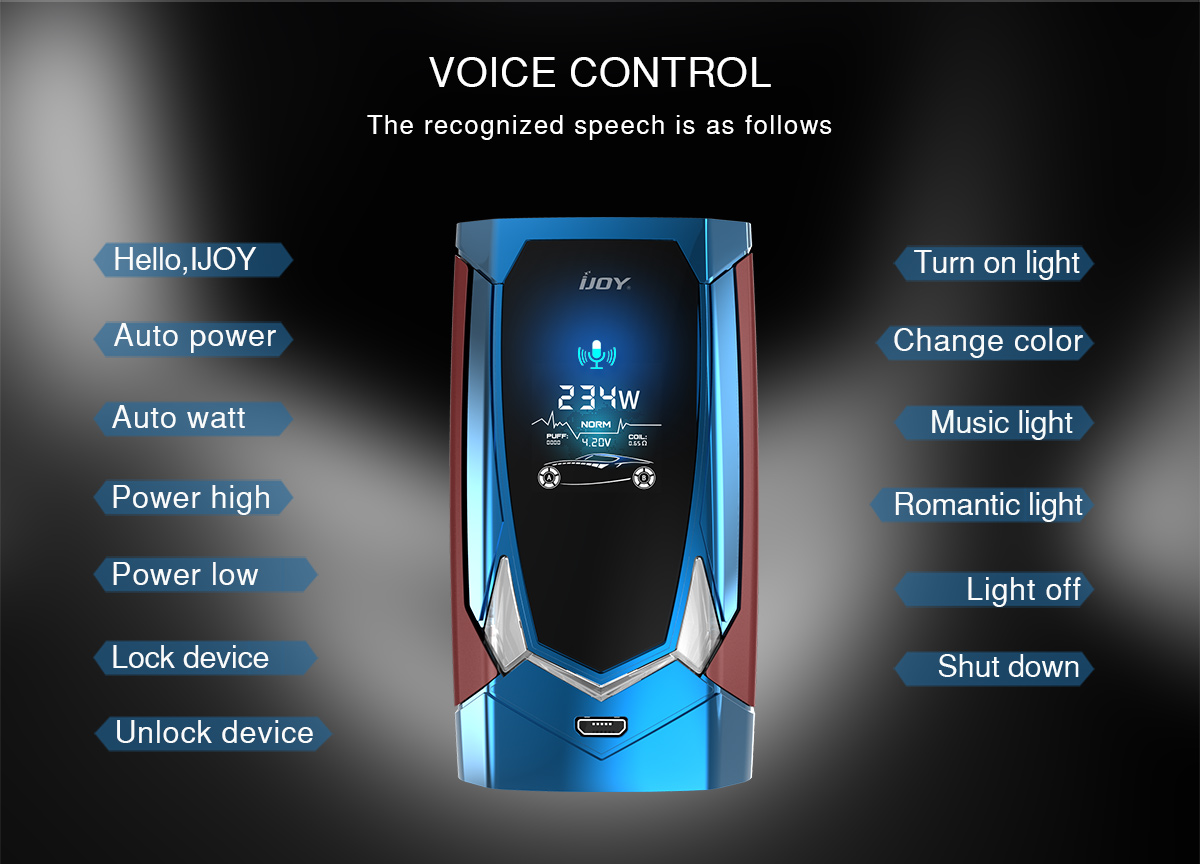 The mod itself, is a little harder to really talk about.  Away from the gimmicks it is a very good mod.  The build quality is great, the fire button is nice and clicky and the navigation buttons are easy to press.  the paint will start to chip over time, but that comes from natural wear and tear which is to be expected.  The main talking point with this mod is the voice control and does it deliver…..partly.  The voice control works by using phrases following hello Ijoy and i have found it to be temperamental at best.  Sometimes it does pick up your voice and sometimes it doesn’t.  When in an environment that has noise that makes it harder again which is a little bit of a con for me.  However when the voice control works it works really well.  there are options from power up/down, light mode, lock device, shut down, and even an auto watt that selects the optimal wattage.  My only thoughts with the device is whether the voice control is truly necessary.  the mod without the VC would be a very good mod, so the added voice control doesn’t bring anything other than what it is, a gimmick unless in the right hands

So overall the kit actually is pretty good.  I think with mods like these it is hard to look past the advertised feature but the mod will perform well and the tank will be the unfashionable but equally impressive mesh tank that only those who own it will know.  The sort of kit although advertised to the mass market will be ideal for someone who can make the most of the voice control.  The technology in my opinion doesn’t bring anything necessary to the mass market but for someone who may struggle with sight or hand co-ordination this mod will be ideal for them.  At the price you can get this for now, it is value for money, Not quite the superman of mods, but it makes a very good black widow.

8 Total Score
A Solid and well performing mod, with or without the voice control

Overall a great kit that provides solid performance, is well built and proves to be reliable. The added voice control when it works is a nice touch and it does allow you to control many aspects of the mod. the lights are nice additions and the tank mesh coils work almost as well as the market leading tanks.