Joyetech are changing the landscape of vaping forever one product at a time.  They had a great idea with the Exceed NC kit but does the Ultex T80 really bring out innovation in an overly stagnated market?

Going back as far as 6 months ago, Joyetech as a company were out there developing new ideas from existing designs on the market with products such as the Espion Infinite and Pro core tank.  If you want to check out my thoughts on that product then you can do so Here.  Generally though they were nice designs and well made products that didn’t necessarily hit the market in a big way so Joyetech took a step back and the end results here are fantastic for innovation and potentially a great alternative to standard sub ohm tanks, albeit still within its infancy.  The Ultex T80 is the latest in pushing new ideas and potentially, Joyetech have come up with something as big as the Atlantis tank way back 4 years ago now.  But how does it work?  And more importantly, does it work well?  Before we get into it, let’s go into the details. 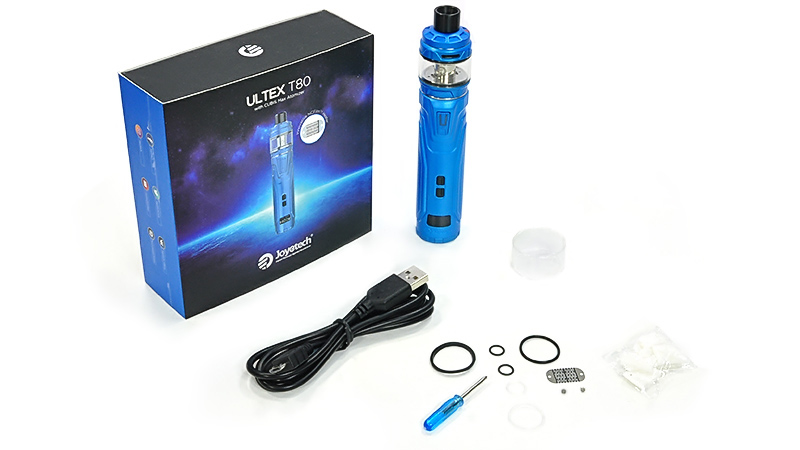 About the Ultex T80

The T80 Mod is a single 18650 battery stick mod capable of hitting 80w.  The device comes with a lovely etched design with a choice of two colours (as shown).  The device has a side fire button and USB port for 2A quick charging (always recommended to use an external battery charger).  It has a small screen at the bottom of the device which displays wattage ohms voltage and firing time when vaping, with 2 navigation buttons positioned above the screen used for navigating the simple menu.  3 Clicks of the fire button allows you to select mode with a choice of 8 including bypass, wattage, temp SS/TCI/NI and 3 TCY M modes.  It has a gold 510 pin and size wise it is designed to use with the tank provided so no room for bigger atomisers.  The battery tube compartment is opened and closed with a round screw out bottom with gold negative end with no battery rattle once sealed.   The device stands at 138.5 mm tall and is quite large circumference wise to it resembles more the top end stick devices rather than, for example the Exceed NC mod.  Finally 5 clicks of the fire button shuts the device down and it turns on and off very quickly.

About the Cubis Max Tank

The tank comes with a 5 mil capacity glass out of the box with a top fill design.  The top fill has a side open top with a kidney hole design and has a replaceable 510 drip tip.  The colour matches the mod giving the whole kit a matching design.  It comes with top adjustable airflow which Is designed to prevent leaking of any kind.  However the real selling point of the tank does not come from the boring details, it comes from the coils, or more importantly the lack of them.  Rather than provide a coil, instead the tank is opened up from the bottom, screwing the bottom of the tank and pulling the base away.  Here the magic starts to come apparent as what you will find on the bottom piece is a square of cotton, and on the top, the new Joyetech NCFilm heater.

How the tank works is a little bit special in all honesty.  The cotton on the bottom gets saturated and the NCFilm heater which is essentially a strip of kanthal, heats up the cotton to produce the vapour.  Joyetech say the NCFilm can last up to 3 months in their tests based on 800 puffs a day using 60 VG liquid at 40w.  Over time you simply clean the heater with a cloth and replace the cotton as and when needed, that’s it. So potentially the coil-less tank eliminates the need for stock coils and therefore makes the tank completely innovative. 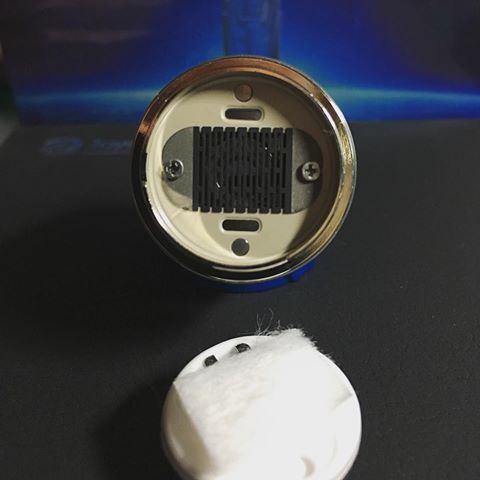 Pros of the Kit

The first pro out of the box is the coil-less design that the tank brings.  The idea is so revolutionary that potentially the technology behind this could well open up a new avenue in vaping.  You get good vapour production, fairly good flavour for a 40w tank and great airflow from the top rings.  By itself it is a solid low power DL tank but the coil-less design added in makes it very economical also.  The next p0ro for me is the tank being leak-proof and that is also something that the tank delivers on.  I have had this lying down upside down etc and no leaking of any kid, nor from filling so great to see a tight tank there.  The next pro for me is the capacity of the thing out the box, 5mils will last you for a long time at 40w and that is another way that Joyetech have delivered here because the idea combined with the lack of required filling makes the whole thing a joy to use.  The cotton it is worth mentioning as a pro does last quite a long time also. It doesn’t come without limitations, for example trying a high sweetener liquid in there did burn the cotton after the tank and you could then taste it a little bit.  But going back to the pro of the coil-less design, simply putting a new square of cotton and saturating it and you are ready to go again.  My pro about the T80 is that it feels solid, well made and comfortable in your hand.  The raised fire button is positioned so your thumb can comfortably hold it and the bottom screen is put away from the buttons which is a other pro for me.   Another pro for me is the fact that it doesn’t feel top heavy either with the tank full on the top.  No wobbly issues when placed down upright and most of the weight is in the mod rather than the tank so it is very easy to hold and carry.  So overall it is a very well made mod that feels quality in your hand 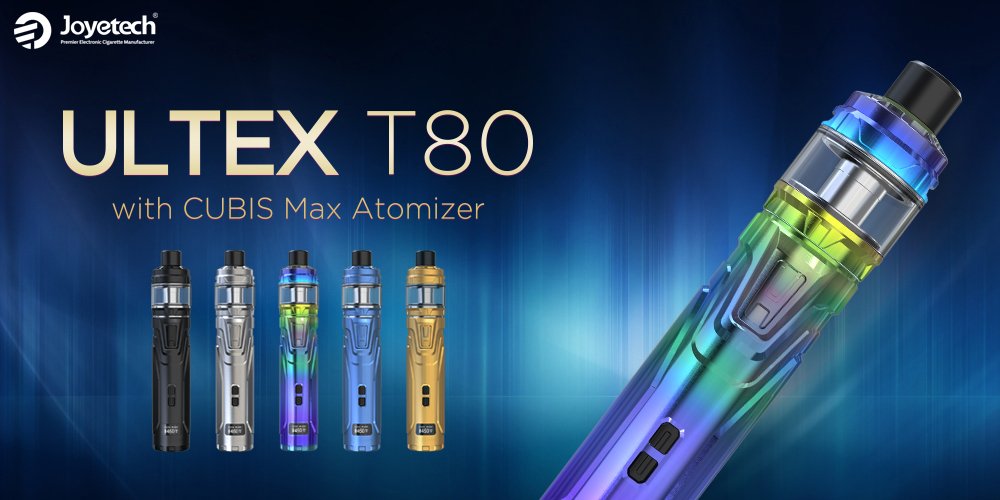 Cons of the Kit

The first con for me is a fairly big one but one I hope Joyetech fix in a firmware update because if they do, it removes any real downside to the kit.  To put it bluntly, have you ever had a mod that the tank of liquid lasts longer than the battery life does?  I am using a LG 30amp 30r battery in this device and it last me around 3 hours from charged.  In fact as I write this now the battery indicator shows 1 bar but the tank sits half full still.  It is a fairly big flaw but I am confident Joyetech can release firmware to fix this issue to really utilise the power of the single battery in there.  This kit has everything right now except for battery life which is really strange to say.  A software fix as mentioned changes this from an unbalanced kit into a fantastic all around one.   The other con is that the flavour isn’t top draw from the coil-less system.  However it does deliver flavour and what you would expect at around the 40w mark compared to top end 80w mesh tanks out there.  So it is worth mentioning you aren’t going to get flavour that matches the very best but then the idea behind this is to deliver something else very beneficial.  The flavour is still strong in more potent liquids but something more mellow and laid back in flavour will taste a little more muted. I do still enjoy the vape and the vapour production is still excellent at 40w.  The final con initially is the price point to this, it is retailing a little high at the minute but once you can get this for around £50 then you will be getting a great bit of kit for your needs.

I am a massive fan of innovative products and I love to see them enter the market.  I was a big champion of the idea behind the Revvo tank, In my previous review Here  of the NC kit I loved the idea behind it and with the Ultex T80, I think this idea if developed further beyond the Cubis Max can really change the industry.  The market is crying out for new ideas, new ways of doing things and here I think Joyetech really have got something, I really hope like the NC kit before this, they run with these ideas and develop them further to rival even the top end stock coil tanks.  In the Ultex T80, they ave a very solid low power sub ohm kit that has such a good economic idea that I recommend anyone who even likes this idea to pick one up.  If you want something that feels good in the hand but isn’t going to blow out a massive cloud then this is for you.  If you want something that saves you money in the long run buying stock coils and prefer a lower power vape then this is for you.  If you just want something different then this is for you.  Just as long as Joyetech can get the firmware out to fix the battery life!

Potentially the future of sub ohm vaping if Joyetech run with the idea.  The Joyetech Ultex T80 is a solid kit and hopefully the dawning of a new area of vaping that they could only have dreamt up.

7.5 Total Score
A potential Revolutionary Idea that is delivered as a decent low watt DL vape

The Ultex T80 is by no means a perfect kit and there is downsides to the new way of having a coiless tank. However served as a low wattage sub ohm tank, the coiless design provides economic value and the whole thing feels brilliantly made. I am excited to see where this technology can get to.