Sigeleli are back with an absolutely stunning device.  But does the Chronus prove to be the rolex of vaping or simply the 10 pound watch you buy near the beach?

Sigelei are a company that really made strides under the Snow Wolf brand back in August last year with the striking Mfeng.  The device was simple but the aesthetics made it a huge hit, which can’t be said about the Sobra unfortunately.  Despite the unique design, the Sobra never really left the shadow of the Snow wolf so this is Sigeleli s attempt to shift attention back onto their name.  The Chronus clearly has gone for looks, with an almost horologe style and joystick control.  The kit certainly carries an aura of style about it.  But does the Chronus offer substance to that or is the flashy and classy design hiding a product not worth your time?  Before we get into that, let’s get into the details first.

The Sigeleli Chronus is a dual 18650 battery device capable of firing up to 200w.  It has a tall rectangle design with slanted sides a round clock face shaped screen on the front.  The top of the device has space for up to around 27mm tanks before overhang with the bottom being a battery hinge door.  The front of the device has the round screen with a gold ball small joystick underneath for control of the device and USB port underneath that.  The fire button is a small round plastic etched button found on the right hand side of the device and the mod has the Shikra logo on the back.  It will come in a two tone colour scheme with plenty to choose from with its release. Finally there is a clock screen-saver on the device showing time when the device is switched off.

Controlling the device is done through the joystick with a push in and hold up taking you to the simply menu system.  Here you will find options for modes (power, Ni, Ti, SS, TCR , TFR) with preheat option found after selecting.  The Set option gives you information, screen choice (choice of 2) , clock set and vape cut off time option between 10-20 seconds.  5 clicks of the fire button shuts the device off and 3 clicks locks the device and activates the password protect, more on that underneath.  Up and down on the joystick controls wattage increase with left taking you to pre heat and right showing coil resistance.

The password protection is a 4 digit password activated only when changing batteries or locking the device with 3 clicks of the fire button.  The default password is 8888 out of the box and changing it is done via the lock screen as well.  Hold the fire button and stick in until it gives the message of password reset and then choose your new password and hold them in again until the message reset OK appear, then simply input new password and carry on vaping.

The Shikra tank is a 5mil bubble glass capacity tank that is 25mm.  It comes with bottom airflow and a screw off top fill with large kidney shaped hole design underneath.  The tank has a replaceable 810 drip tip on top with a coil cage inside for extra protection.  The coils come in rated at .2 ohm (60w-120w) and 0.4 (40-80w) standard kanthal coil. 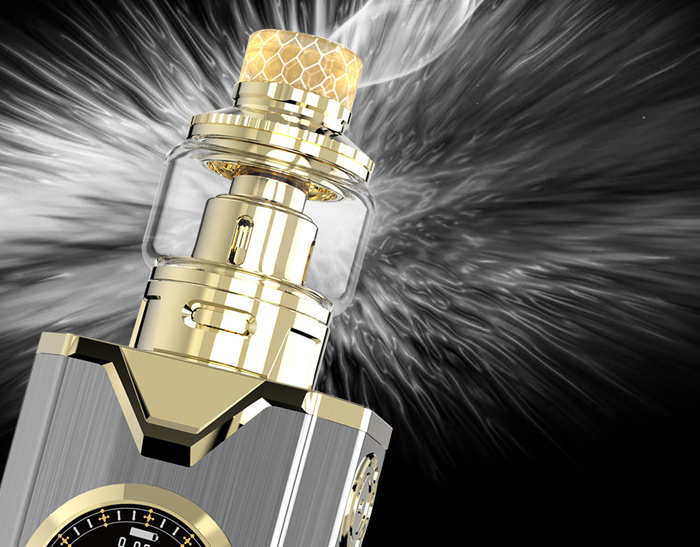 The first thing I can really say about this kit is that it feels really comfortable to hold in your hand.  It sits at just the right size and the fire button is really well positioned without it being protruding, meaning you can easily rest your finger/thumb on top whilst carrying or holding the device.  The screen is bright and clear displaying only relevant information of watts, coil, battery indicators and mode with the GUI taking up the rest of the space.  The device feels solid and well made with no chipping or marking of the painted body at all with regular use and the colours are bold and beautiful depending on choice giving you a very striking mod indeed.  The joystick is very easy to control, with the ball style rolling nicely on the thumb without any slipping and the controls are easy to follow with no overly awkward control mechanisms in place.  The simple menu system is another positive for me because it provides a simple device free of a hundred and one options for a user to get lost in compared to some devices on the market.  The password protection does provide some added security for the device locking anyone out who does not require usage of the device which in theory is a good idea from Sigelei.  One of the biggest pulls of the device aside from the looks is the battery life, it is fantastic on this device.  Vaping this on 90w on regular use it has at least a day and half battery life easy, with lower wattage getting even longer.  The simple system in place combined with a finer tuned chip-set has given Sigeleli a device that will last well over a day with heavy use, putting it better than the Drag 2 in my experience.

The Shikra tank actually quite surprised me, especially with my experience of the previous moonshot tank released with the Sobra.  The flavour is pretty strong from these coils in all honesty, with the standard .2 coil still going strong coming up to at least 2 weeks of usage daily.  The airflow is great on the tank, not overly loud and the top fill is very easy and secure with the screw down mechanism in place.  The vapour production is great from the coils and overall, the tank does perform pretty well for a kit tank.

The Chronus does not come without its little flaws which are niggly but do exist.  The first one was actually my first impression of the device.  The limited edition of the tank comes in stainless steel body whereas this one is a plastic panelled device.  My first thought was that it felt a little bit plasticky for my liking, although over time using it that did subside and I started to really like the fell of the device in the hand.  So if you aren’t a fan of plastic bodied devices then this will be a huge point straight away.  The password protection although a nice idea is a little bit unnecessary in my opinion, preventing a quick lock and unlock vape meaning you have to turn the device on and off whenever you want to lock the device without it.  Again a minor inconvenience but entering a 4 digit pass-code to vape does take around 15 seconds, longer if you choose a more complex combination.  The lack of real menu options will be a con for some people, with the device coming in quite simplistic in operation.

The Shikra tank although solid, isn’t a fantastic tank and this seems to be mainly down the the same issues that plagued the moonshot and wolf tanks previously.  First things first Sigelei have gone for the small coil design again which is part of the reason for the restricted flavour.  You do get a strong flavour through the coils but you don’t get any of the complexities of the flavour.  So only simple fruits are really recommended to be used with this tank.  However an existing problem before still exists here with the coils, the heating of the coil adjusts the resistance still.  The coil will read close to the right resistance sitting normally and will increase when vaping by a huge .1 jump, with the coil cooling back down the the correct resistance.  This has to be down to the material used and it does slightly affect the vape.  I will say the vape at 100w with the .2 ohm does feel underpowered a little bit as well, presumably again a side effect from the smaller coil profile.  So although it vapes well at 100, it feels more close to around 75w in vape.

The Chronus kit is a very interesting kit, for mixed reasons.  The mod itself is actually a really good device, providing excellent battery life, simplistic controls and a gorgeous look about it.  However the Shikra tank falls into the same issues as sigeleis previous tanks and this somewhat feels like the tank was an afterthought in the design process. This is what is holding Sigeleli back now from really making waves within the market because they make really good and beautiful devices but the tanks are forgettable and normally wont last beyond one coil life worth of usage.

As a device, I would actually really recommend picking it up.  Similar to the Mfeng, you get a very simple but well performing device that is aesthetically great on top of that.  Battery life to outperform some of the best on the market today and a simple control mechanism meaning nothing to get lost in.  If you do pick this up though, forget somewhat about the Shikra tank because it really doesn’t match up to the mainstays within the market.

The Chronus proves Sigeleli are back making brilliant devices, but forgetting about the tanks.  The rolex of vaping mods, the Chronus does prove that when Sigelei take the time to produce a new mod, they can make them like clockwork.

7.9 Total Score
The Chronus rolls back the clock for a brilliant Sigeleli device

Sigeleli have followed the Mfeng with another stunning device that performs brilliantly as well. The tank is forgettable but the Chronus is well worth taking a look,, it is a fantastic simplistic mod.