One of the more unique looking mods of the year, Sigelei have taken the design for a more portable experience.  But does this baby snake still bite like its dad or is it left relatively harmless?

The Sigelei Sobra was a great device when it launched back in August (review HERE) combining a rather unique design with honestly a good performing mod.  Looks may have been subjective but it was a modest hit within the market.  Sigelei have come back with its baby, the Sigelei Sibra F, a stick version which aims to bring the performance that you would expect with the unique design that made the Sobra a hit.  A rival for the more big hitters of the stick market, does the Sibra match up or will it fall short?  Before we get into that, let’s get into the details first. 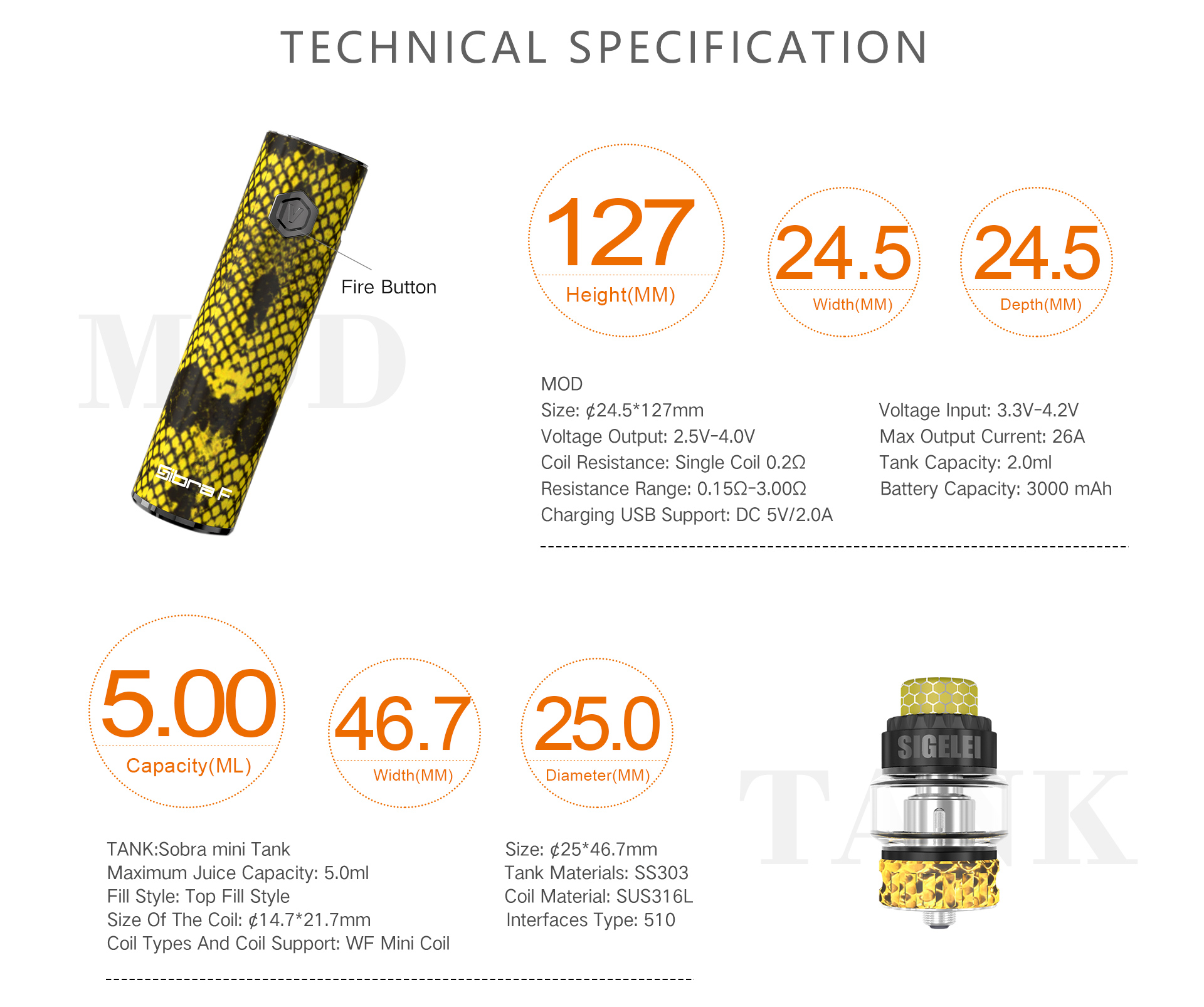 About the Sigelei Sibra F

The Sibra F is a stick style vape design aiming to bring sub ohm vaping on a portable style.  The device is a 3000mah internal battery chargeable via usb.  The device has a sleek snake skin look with hexagonal fire button with lights behind and USB charging port to the side.  The device comes with a 510 pin on top which will fit only 25mm tanks without overhang.  It comes with built in protections and averages around 50w of power in total to the tank.  It has 3 charging lights, clear/blue for high power, yellow for mid range and red for low power with the device shutting off once battery is empty.  5 clicks of the fire button will shut the device off.

The Sigelei Sobra mini tank comes 5.5 mil capacity out of the box (2mil TPD) and comes packaged with 2 coils rated at 0.28 ohms SS316L material and fire between 30w-60w.  It has a replaceable 810 drip tip on top and comes with a rotating fill hole which turns to reveal hole.  The tank has 25mm threading, bottom adjustable airflow and comes with casing inside the tank for added protection.

The first great thing about this device is the lightness of it, it is extremely portable beyond its height.  With it coming in smaller than the bigger competitors, it makes it quite the useful little device to take out and not bulk up your pocket.  The design on the front will be subjective but another good thing about it is that it took the rough feel of the Sobra away and made the whole thing smooth instead.  It means the feel of the device is no longer a niche style but a generalised plastic feel with the alloy body underneath making it feel sturdy.  Overall the Sibra F feels really good, it feels really well made and the fire button has a silent soft press which is quite a nice touch.  Battery life on this thing at 3000 mah is another good thing about it, the battery at casual use intended for a device like this will let it last all day but still allow you to sub ohm whilst you vape.  Charging time is pretty good, around 2 hours to fully charge back again and the lights as indicators are quite useful as well.

The Sobra mini tank isn’t a bad tank to be honest.  Designed for the lower powered DL vape, the coils give nice flavour without bringing complexities to the liquid.  It has a nice solid taste to the vape and the vapour production at around 50w is actually rather good, it certainly clouds.  The rotate fill hole is quite a niche and good idea to be honest, it is quite easy to do and the turning is seamless as well.  The big capacity out of the box is another good addition as always, especially when you take into account the wattage, meaning a full tank will last you as long as the battery does.

I think the first thing to mention is that the design isn’t going to appeal to everyone similar to the Sobra.  It is one of those designs you will love and hate so that comes in as a con because it lacks the mass market appeal that perhaps a more plain design would have gained.  Although the battery life is good, it doesn’t last as long as I would have really liked it to.  I think with a sub ohm tank on top, you need to really be pushing it a little bit more on life at that mAh and I don’t think that it truly does that.  It will last you but just not enough for the charge time.  If it came with quick charge then I think that could have been overlooked.  Another thing I don’t like with the mod itself is the lights behind the button, they aren’t bold enough, especially in daylight meaning it is by vape more than visually you know the battery is dropping.  A more dedicated light there would have been a better idea.

The Sobra Mini tank, the first thing I can say is the name of it.  The Sobra came packaged with the Moonshot 120, so it is a little odd that this is then called the Sobra mini rather than the moonshot mini.   Further on the fill hole idea, with it being easy to turn without a lock mechanism, it means it is easier to open up and leak as a result which is not a good thing to happen in your pocket.  A small clasp to secure the turn once closed would have eliminated this altogether. I think the one thing that the tanks falls short in is the general idea that sigeleli seem to be following, the small coil design.  Although the flavour is nice on the coils, the size of them is always restricting the flavour which I think is really holding these tanks back.  A bigger design may have brought flavour complexities through a little more and made it a really nice little tank.

The Sibra F is one of those kits that essentially is going to be appealing based on looks and purpose.  If you don’t like the idea of the snakeskin design then it wont be for you,, however if it appeals then this may well be a nice option.  The kit does have little overlooked flaws as covered which hold it back but if the price point is right on the kit then potentially it can make up for those shortcomings.  Overall it is a average to good little stick device that seems to draw its appeal on design rather than performance but as mentioned at the right price, could be classed as a good little kit.

The fangs are there but they aren’t sharp enough to provide the deadly blow.  The Sigelei Sibra F is a good little kit but ultimately feels like a rushed idea rather than an overall quality product.

7.6 Total Score
It has bite but not the killer blow

The Sobra F feels like it was a great kit that needed just a little bit more time in development. The coils provide good flavour and vapour with a good internal battery but little flaws hold it back from being a must buy purchase