Has Sigelei brought something that can charm the vaping community or will the fangs prove too much to handle? Find out now in the Sigelei Sobra Kit Review 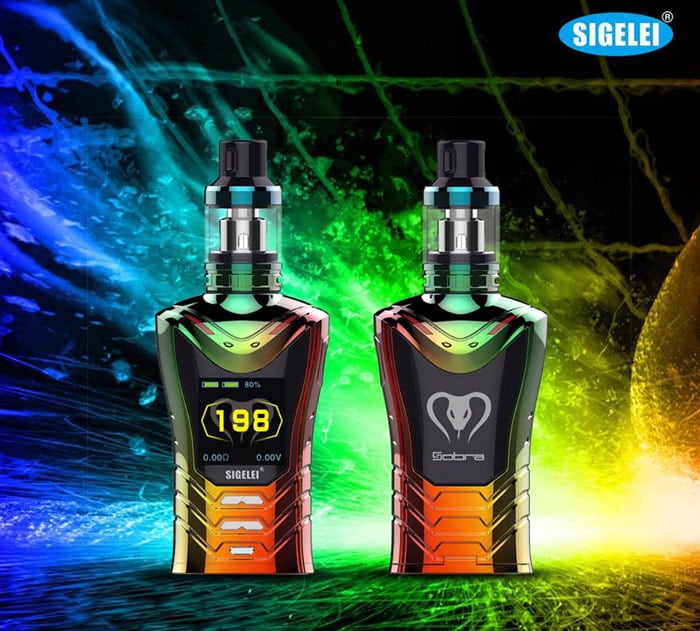 Sigelei’s latest release is going to be a very diversive one, aesthetically you will love it or hate it,  It is the Sigelei Sobra kit.  A dual 18650 mod capable of 198w and comes packaged with the new Sigelei Moonshot 120 tank.  It is the type of product that can be very easy to make your mind up about on first sight, which is understandable.  But is this worth picking up?  Is this kit going to be worth your money?  Before we get into that, let’s go through the details.

About the Moonshot 120 tank

The Moonshot 120 is the spiritual successor to the quite popular Moonshot RTA that was released a couple of years ago.  The main difference with this being it is a stock coil tank rather than rebuildable.  The tank comes in with a 5.5mil capacity glass and top screw fill mechanism with kidney shaped hole design. The fill hole comes with a protective seal to prevent leakages and can be used by piercing the seal with a bottle nib to fill the tank.  It has a non replaceable drip tip and it comes with bottom adjustable airflow.  The tank is a 25 mm tank set into the design of the shape which means it can not hold anything bigger on the top without overhang.  The tank packaged with the mod comes with a bottom design to match the mod colour/pattern and the glass is bubble shaped.  The coils come in between 40-80w and 60-120, and sit in a bottom screw connection as per standard sub ohm tanks.

About the Sobra Mod

The Sobra mod is a dual 18650 battery device capable of firing up until 198w exactly.  It has a bottom battery door hinge design with gold plated battery connectors marked positive and negative.  The mod has a curved design, to fall in line with the design and has a right hand circular fire button disguised into the mod patterns.  The two navigation buttons are situated below a 1.3 inch TFT colour screen and underneath that is the USB port. The mod is made from a zinc alloy with a painted design to emulate snake skin which covers the entire mod with a 510 spring loaded connection sitting central on the top of the mod.  Above the screen there is two LED eye lights that light up orange/red (depending on kit colour) when fired.  The menu system is accessed through 3 clicks of the fire button and navigated by the two buttons underneath the screen.  It has a similar menu option range to the Mfeng by SnowWolf with limited options, 6 power modes (Power/SS/TCI, TI 1 + Ni200), power saver mode, pre heat options and 2 different screen designs.  Finally 5 clicks from the fire button will shut down the device, holding 2 navigation buttons will set resistance, fire button and top button will show battery individual voltage and fire and down will lock the device when held. 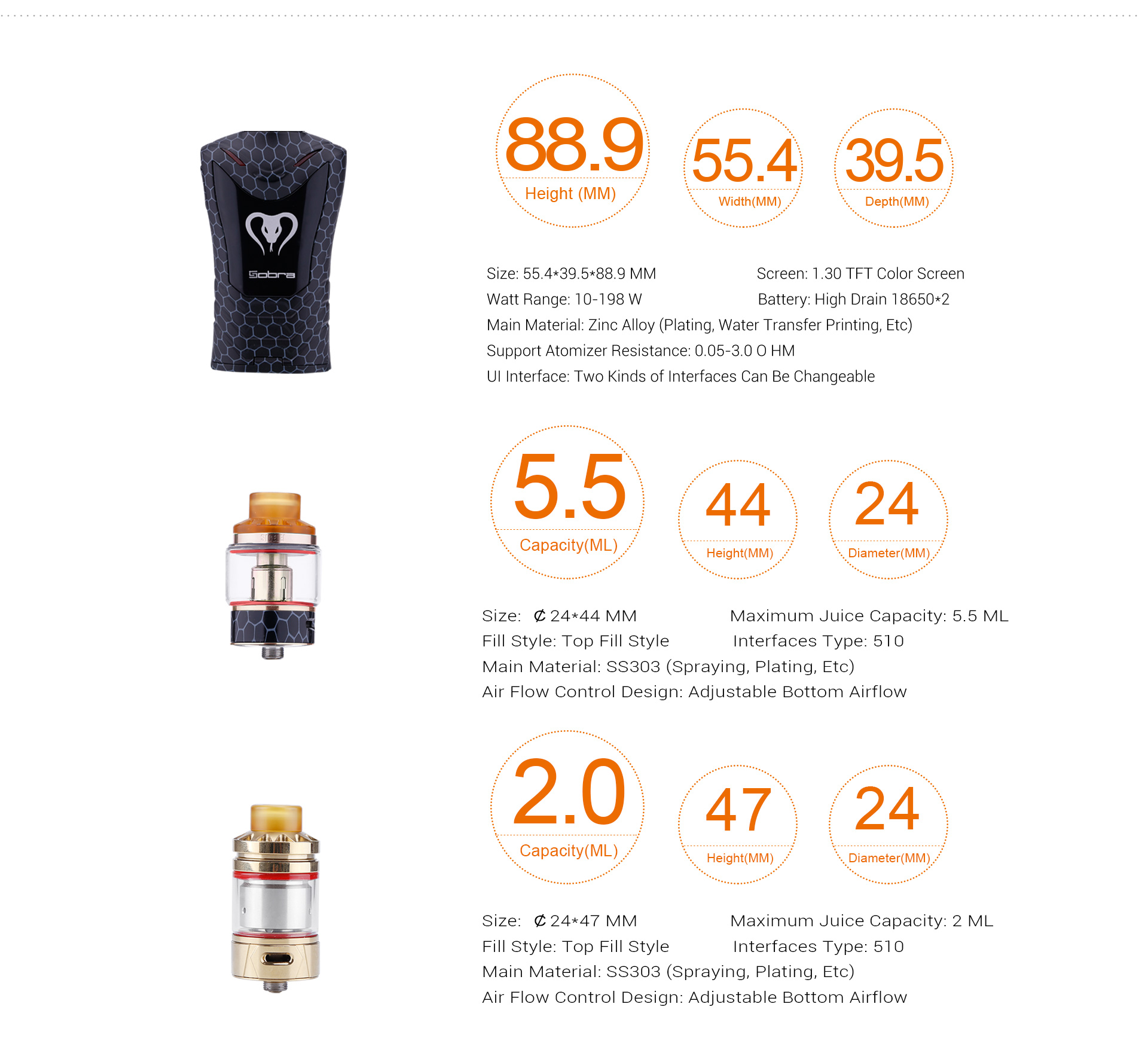 Thoughts on the Moonshot 120

Thew moonshot tank design wise is fantastic in my option.  It looks different to the standard sub ohm design, has an easy top fill screw top, a coil chamber inside to form the chimney and quite good airflow at the bottom.  The tank does not heat up much when chain vaping and the flavour from the coils is pretty decent in all honesty.  If I ended my thoughts there then it would be a very good tank by Sigelei, however there are a few minor cons I have found in my experience running a fair few tanks through it that are worth mentioning.  The first one is the coils, they aren’t very good.  I love the design of the tank as mentioned but the coils don’t seem to match that design.  They look similar to an old sub ohm coil, smaller and less in there and as a result I have found that does impact performance.  The 60-120w coil lasted me 3 days before it started dry hitting a liquid I knew does not have that effect on other tanks, however to its credit the 40-80w coil has lasted me longer and is still running as I type and vape on it.  There is still pretty decent flavour from it also at around 70 and I have not experienced any spitback from it either.  It just seems a strange design option from Sigelei, especially when I have not seen those types of sub ohm coils for nearly 2 years now.  The natural progression has made coils bigger for more power but these are more like old Atlantis coils if you remember them.  If Sigelei release a RBA kit for this tank then that would be a fantastic compromise keeping in tune with the original Moonshot and would very well elevate the tank up to a very good tank again in my opinion.  The other con is similar again to the Wolf tank I previously reviewed in which the top O ring tends to come off easily when dismantling the tank.  Again just keep in mind when cleaning that the O ring is still there and you will be fine.  Other than that, there isn’t too much more on the tank, basically if Sigelei release an RBA then it could well be a really good tank selling individually from the kit. 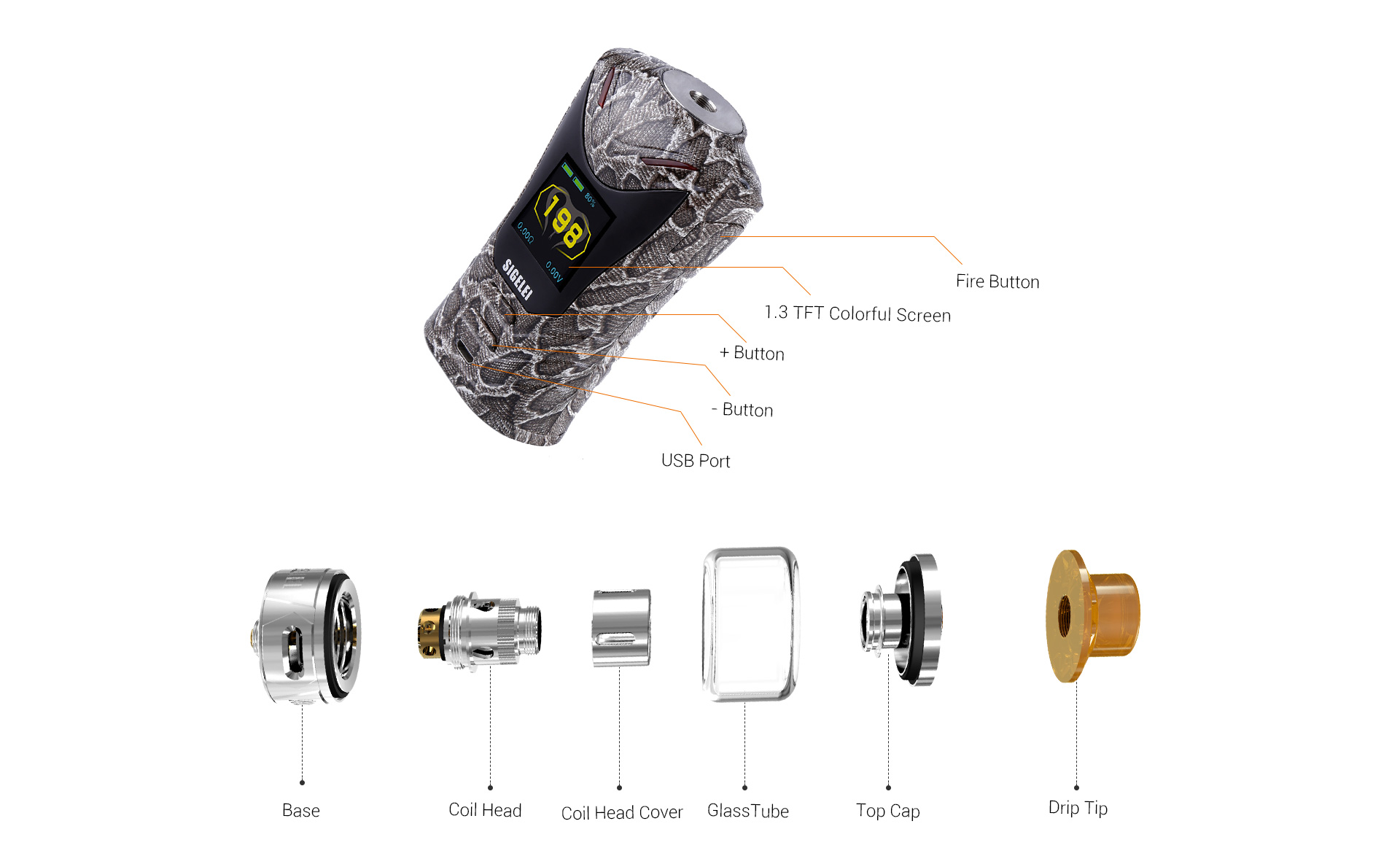 Thoughts on the Sobra Mod

As mentioned in the beginning, the design of this mod is going to split people down the middle.  It is very much a gimmick mod and some people will be turned away by it, which is fine because a mod that looks like a snake isn’t going to be everyone’s cup of tea.  However the mod is actually pretty good, I would go as far as saying it has really surprised me this past couple of weeks because it has performed really well.  The design of the mod doesn’t feel metallic at all, smooth paint design with no chipping or scuffs since picking one up.  I love the light up eyes added to complete the look, the design is comfortable to hold and there is no excessive weight to it.  It feels solid and for the most part it performs really well.  However there is one small flaw that I hope Sigelei fix in a firmware update as it is another factor I have found that relates to the Moonshot 120.  The resistance does change on every puff taken.  It goes up and down and never really settles on one ohm rating.  It does do this with other tanks but nowhere near as much as the Moonshot coils.  So this may be off-putting for you out of the box, I have not found it to affect the vape quality in any way and the resistance never jumps up to a significant amount. So it is one of those flaws that if you don’t look at the screen then you will not notice it doing it.  I imagine the knock on with it will be using the other modes on the device which rely on a resistance being set in stone.  Other than that there isn’t much else to fault the mod on, it works really well. 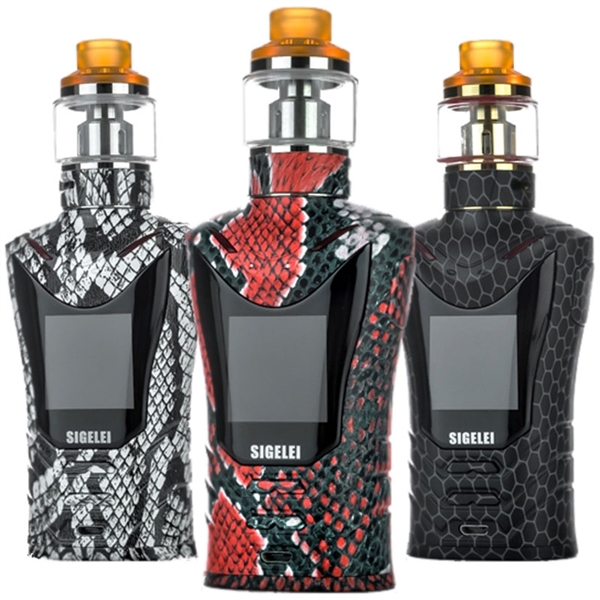 The Sobra kit surprised me in a number of ways as admittedly I didn’t expect too much from it.  I am a massive fan of gimmicky mods as I will always admit and this sort of design is right up my street.  The mod does perform really well but the Moonshot is a little bit of a let down with those coils, I want to say great thing about them but they just can’t compare to mesh coils out on the market today.  As mentioned above, stick an RBA deck in the tank or use a different tank on top of the mod and neither can really be faulted then, both really well made things, just not together.  This kit would be ideal for someone like me who would love the design and shape, If you are buying it for around the £50 full kit mark then it won’t leave you disappointed.  I will be using this in my rotating devices, just maybe with a different tank on top.

Sigelei have really surprised me here, a mod with a bite and a tank with plenty of potential.

7.8 Total Score
A snake charming mod with good performance inside

The Sobra is one of those mods that if you like the design then buy it. It has nothing different or deal breaking, it is just a great performing mod with a great design. However wait for the RBA deck for the Moonshot to make the most out of the tank.