The biggest company on the market has taken a break, have their return hailed in a new era of Smok quality or are they continuing the trend they set last year?

Smok are on of those polarising companies, every mention of their products usually follows with discussion.  There was a period of around 9 months where it seemed Smok were catering for everyone with essentially the same mod but with just a different design each time.  However this has been their longest break for a while now and Smok have come back with two kits, the species and the E Priv.  Have Smok used their time off to really step up their products?  Before we get into that, let’s get into the details.

What is in the box

About the Smok TFV12 Prince

the Prince tank included in the E Priv Kit is the same tank that Smok has been releasing for the past 10 months.  It comes with a 8 mil capacity glass (or 2mil TPD Version) with a top fill button release design.  It has a 810 replaceable drip tip and bottom airflow ring.  The tank comes compatible with several different coils but is packaged here with the single and new dual mesh coils Smok have released.  It has 510 threading on the base and is made from stainless steel in several different colour schemes matching the device.

the E-Priv serves to be the start of the new wave of Smok products carrying the new ARM-M4 chipset looking to increase reliability and performance over previous devices.  The mod is made from a Zinc Alloy designed to mirror a car engine inspired look.  It is a dual 18650 battery mod, with a bottom hinge door which has a clasp to secure the bottom. It has a 510 spring mounted pin with space to fit up to 27mm tanks before overhang.   It has a side fire button and two navigation buttons hidden into the design of the device, underneath the screen.  It also comes with a USB port for firmware upgrading and charging (not recommended).  It has a colour screen displaying battery indicators, puffs, wattage ohms and volts.  The menu system works similar to previous devices with 3 clicks to access mode, puff, screen colour and power on/off.  The device has pre heat modes and comes with Wattage/Ti, NI SS and Memory modes. 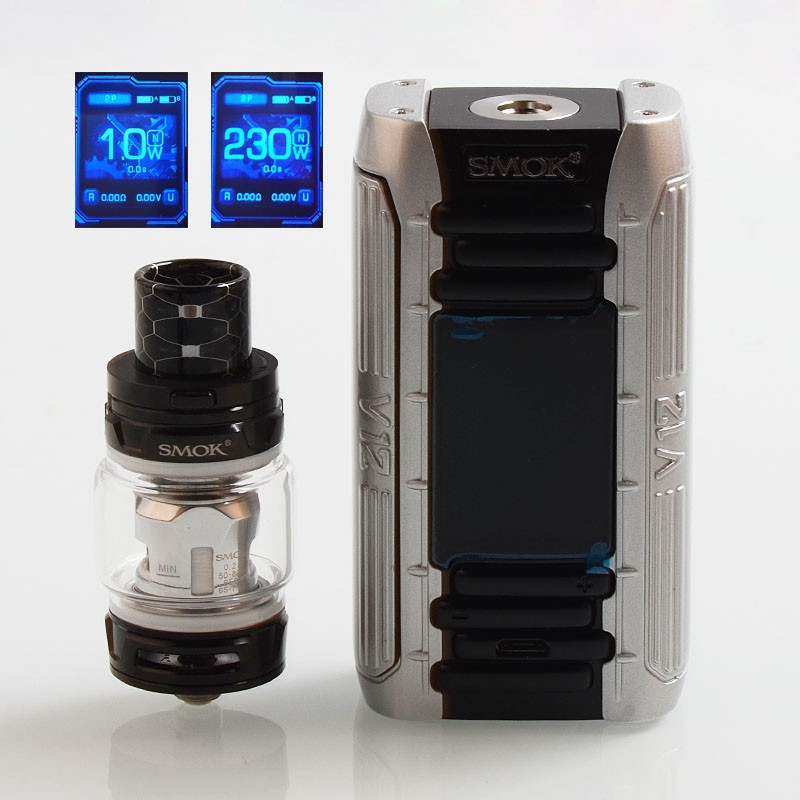 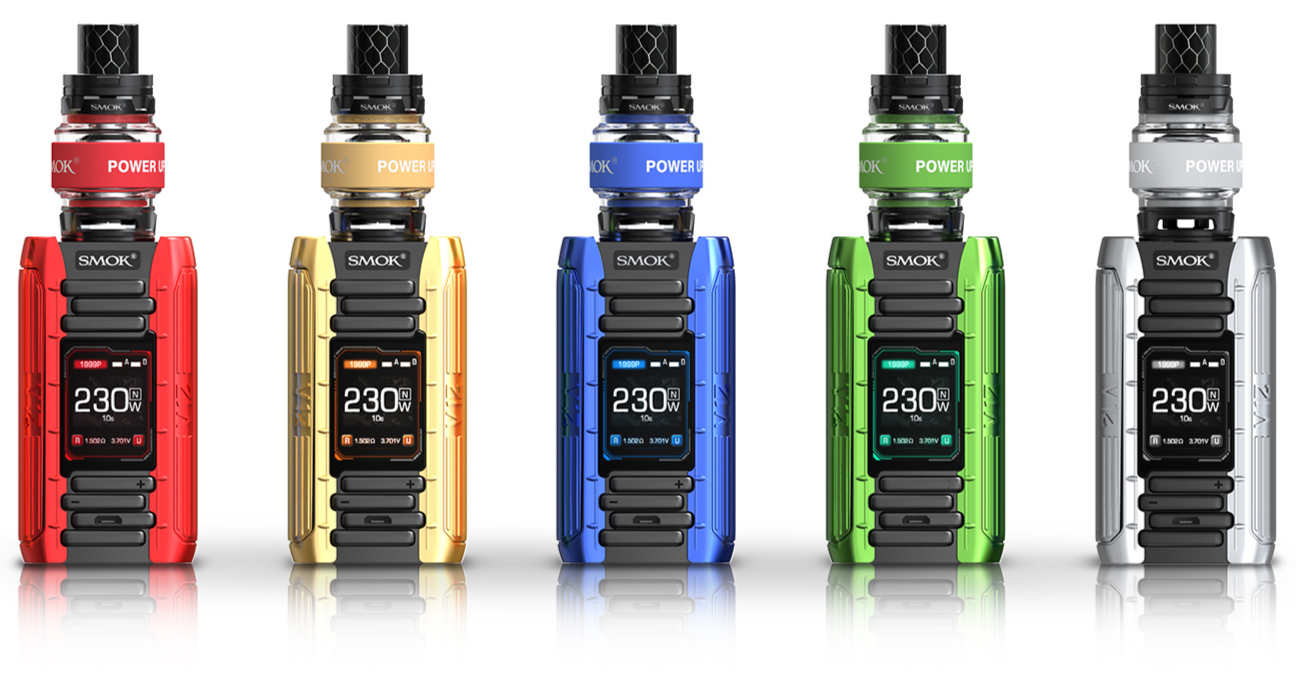 I have always been a fan of the prince tank upon release, it was something i picked up many months ago and it served me well, even if the coils were not as reliable.  In fact it was the cleito 120 that usurped it from my daily routine but I never had any issues with it in all honesty.  So revisiting the tank in its new form with the mesh coils comparable to other tanks I have had the pleasure of using it was a mixed experience for me.  The tank itself is solid and well made, with no leakage issues whatsoever and it feels solid and well made.  It isn’t the best on the market in comparisons to others but it as a kit tank is is solid.  With this version I got to experience the Smok mesh tanks for the first time so It was an interesting experience when comparing to similar coils on the market.  I did find it a little strange that the wattage recommendation for the dual mesh was actually lower than the single, however if the performance was there it didn’t matter.  However I did find the dual mesh coil to be very underwhelming, struggling to keep up below the maximum recommended wattage and eventually had to roll back to 10w less than I started. The flavour did not seem as strong as something like the mesh pro neither, which was a disappointment.  The single mesh held up better and had a solid flavour to it, with the coil lasting around 2 weeks to the dual mesh eventually just feeling under-powered to keep the coil from dry hitting. 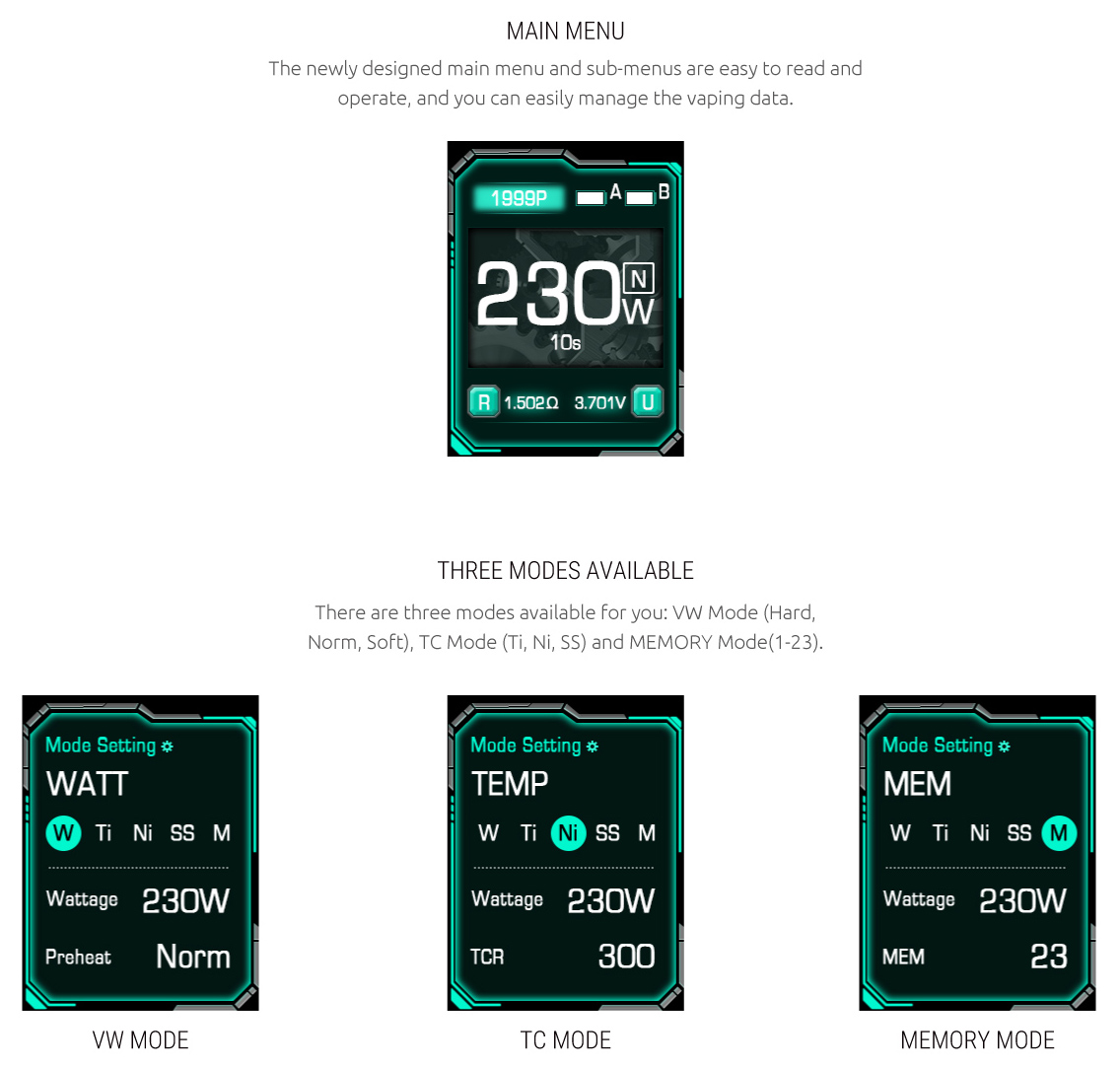 After owning a few of the previous cookie cutter devices from Smok I was intrigued by the new range of devices coming to market.  I think honestly, Smok could surprise quite a few people now with their new chipset.  The device itself is solid and feels really well made in comparison to other Privs on the market.  I am a little lost in the comparison to a car engine design but personally I think the E-Priv looks really nice as a device, nothing overly complicated and quite compact and well considered.  There aren’t any gimmicky lights or designs with this, just a solid design and a clear screen.  The battery hinge door has been redesigned to add security to the hinge with the clasp connection, however this can be fiddly to close properly so not entirely perfect.  However when shut the door is completely secure and I have had no issues with it popping open.  the menu system is Smok’s signature so it is easy to navigate and options are displayed clearly and in all honesty I haven’t had any accidental menu activation’s like other smok devices seem to do so another plus there.  The Chip set is very responsive and fast, with power seemingly quite accurate and the temp control is much more improved also from the older chip set.  Smok seem to have delivered something that actually performs really well here and works accurately on the most part.  The chip set may even rival something that voopoo or geekvape have produced, albeit without the battery life.  I found the battery life to be pretty standard to most other devices so if Smok can regulate the batteries better they may be onto a potential great chip to rival anyone.  There is a couple of niggly issues I found with the design, the navigation buttons hidden in the design are too close together on the mod and as such can lead to pressing both at the same time to lock the mod when you are adjusting power for example which is a minor inconvenience.  Also as mentioned the battery door clasp is hard to fasten first time in my experience so although it secures the door, getting it closed feels a little effort.

Expecting more of the same from Smok, they have really surprised me with the E-Priv really delivering on what Smok have been so far away from for so long.  The E-Priv is such a well made device and the performance is the best Smok have produced, a far cry from the previous cookie cutter range they released.  The device is solid, well made and with a nice easy design with even improved paint than before.  Overall if the device was made by another company then it would be really well spoke about, so Smok have finally turned a corner in what they are bringing to market.  The prince coils do let the overall kit down as they don’t really stand up to the leading tanks on the market so nothing has improved on that front, but just for the device alone the kit is well worth your interest.  Smok seem to have learned from past mistakes and this seems to be the sign that they are ready to compete again as a quality product as well as one that is reasonably priced for the market.

Forget everything you thought about Smok, The E-Priv is a device that will change your perception of the company and what they will actually deliver.

8.1 Total Score
Smok are back, time to sit up and take notice

A massive improvement from previous devices brought out, the E-Priv serves to be a solid and well performing device that actually performs in both design and under the hood. Smok are finally stepping up and raising their game.