Smok marked their return to the marked this September with two very interesting devices.  However has Smok brought an aptly named product to join the rest or is the Species a whole new evolution of the company?

In many ways, the Species V2 is quite a normal name for a Smok device, as far as I know there isn’t a version one available.  It falls into the category of other devices such as the X cube 2 for example of numbered sequels without a former.  However the species does bring something different this time around, a touch screen device designed like a regular mod.  The previous touch screen device was designed a little classy so this profile is falling in line with regular Smok devices.  It carries all the hallmarks of a standard Smok device, has Smok found the key to finally making something ‘must buy’?  For the purposes of this review, I will focus on the mod itself, as opposed to the prince tank packaged as standard.  Before we get into all of that, let’s go through the details first.

What’s in the Box? 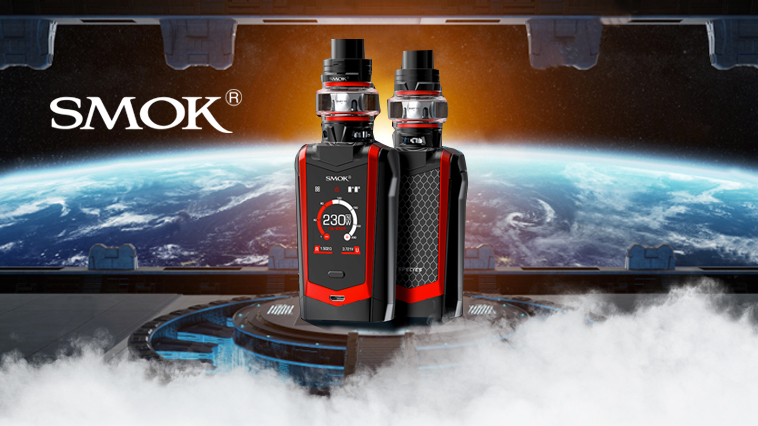 About the Smok Species

The Smok Species is a dual 18650 compatible device capable of firing up to 230W as standard.  It is a fully touch screen controlled device with only a lock button and fire button to use.  The device has a top 510 pin with room to fit up to 27mm atomisers on top.  It has a full side fire button built into the sloping edged design and front lock button with a USB port underneath that.  The back panel has an almost snake-skin design with a large colour screen on the front.  The screen display shows power/ dual battery indicators, ohms, volts and pre heat mode with puff/seconds counter as well.  The front lock button is used to turn the screen off with a short press and lock the touch-screen with a long press, indicated by the padlock on the screen.  3 clicks of the fire button locks the fire button and 5 clicks gives the option to turn off the device.   Finally the battery door is situated on the bottom with a clasp to secure the bottom hinge.

Controlling the touch-screen is done entirely on the front screen with both a power menu button options.  Pressing the plus and minus buttons on the power curve allows you to adjust the wattage / temperature and pressing the menu button found in the top left takes you into the menu screen.  The menu is split into 4 options, allowing you to adjust the Max puffs, power control allowing you to switch between power and temp control modes, Screen time/colour with a choice of 6 and settings.  The settings contains manual ohm settings, factory reset and power off. 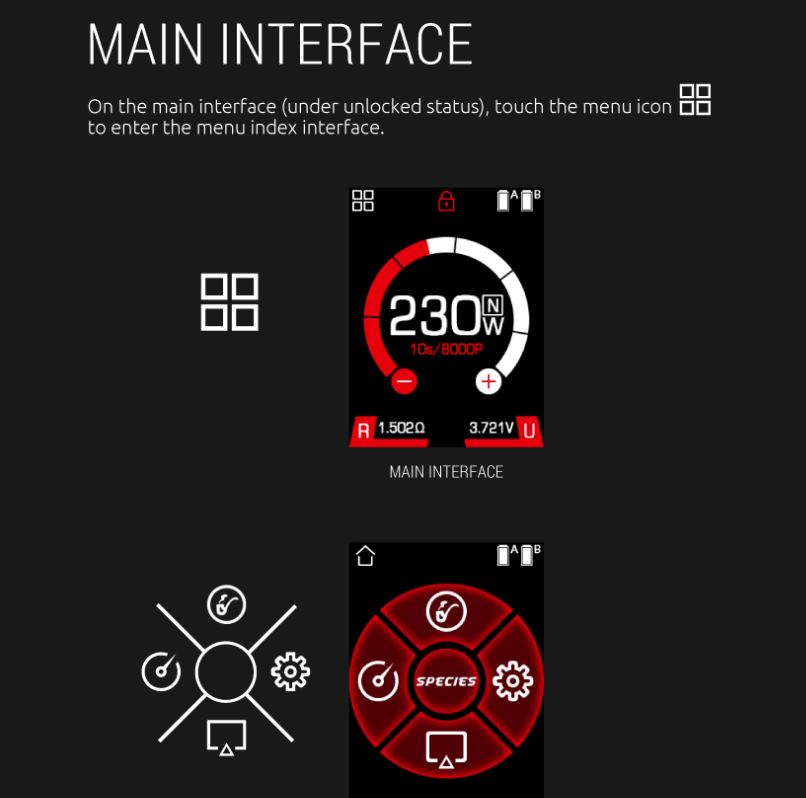 The first thing to say about the species is that it actually feels really good in the hand.  It has a metal body and the sloped sides feel really comfortable and natural to hold.  The profile certainly does fit the Smok template if you want to call it that, looks lovely and well designed for comfort.  The fire button on the side is nice and clicky, requiring a more forceful push to fire compared to previous smok devices.  Although this won’t prevent a fire in the pocket, it would make it slightly harder and the click does feel satisfying.  Having the extra room on the top is a nice touch as well and the centralised 510 pin makes the device look ergonomic with the tank on top.  The locking functions on the device are actually really well designed to provide really good protection for the user offering both a fire key and touch screen lock.  By locking the fire button, the on-screen lock will not come off until the button is held.  This is fantastic as if you keep the screen locked when not in use, it prevents any accidental touch screen mishaps as a result.  Additionally the touch screen lock will remain on despite powering off or changing batteries which I think is a nice feature as well.  The chip-set in the device is actually brilliant, especially for a Smok device.  It fires fast and accurate with the temperature control being a much improved feature of Smok’s catalogue, not too far off a more advanced chip.

Moving onto the touch screen controls the first great thing I can say about the species is that the horrible Smok menu is finally gone.  Instead, splitting the options into 4 simple categories is much nicer to look at and much simpler to use.  No more having to cycle through menus to come back out, with there being a 5 second time out mode as well.  Touch-screen is quite responsive, registering touches for the most part accurately and the power control speeds up the more you hold the button, another nice feature in my opinion.

The first thing I can probably critique on the Species is the fact that although the touch-screen does work fine,  the icons are a little small.  If you have bigger fingers, it can be quite hard to press the menu button or power control first time.  Perhaps slightly bigger icons would have been a better choice, especially considering the space on the screen to allow for this.   The next thing that will be an issue for some is the paint design being a little bit of a finger magnet in the hand.  It is hard to counter this, as a more plain design wouldn’t make the device pop out as much.  So plenty of wiping is required to keep it looking shiny and clean.  Another thing I found, which did prove to be a little deal breaker was the fact the device warms up in the hand a little bit.  Not in a worrying sense, just a combination of hand warmth and coil on top creating a warmer device as a result.  Compared to something like the drag 2 that remains cool, I did find this a little bit of a negative.  The final thing I found, more of a niggle than an issue was the shut off option that appears.  Rather than shutting down, the Species asks you first with a touch-screen option yes or no.  It just adds an unnecessary step when quickly turning the device off.

It proves a massive step in the evolution of Smok, the Species may well be Smok’s best mod to date.  Gone is the terrible menu system, million and one options that you don’t need and cookie cutter design.  Instead the Species proves a sleek look, fantastic chip inside and actually well thought out control design that makes the device actually deliver on the users needs.  It will take a lot to shake off the reputation that Smok carry for justifiable reasons but the Species proves that Smok are serious about delivering quality over quantity now especially at an affordable price.

Smok have Evolved with a whole new species, one that could well be ready to start a new generation.

The next step in the evolution of Smok as a company. the Species proves to be well designed, function fantastic and comfortable to hold. It won't be the game changer but it could well be the best bargain in the market.