Voopoo are back with a brand new kit tank that aims to rival even the very best stand alone.  Does the Voopoo Maat establish them within the tank market or are they still in the middle?

So Voopoo and tanks have not always been the best combination, not in a bad way but they never really stand out.  Take for example the recent Uforce-T2 tank packaged with the Drag 2, sure it is a great kit tank in the box but it doesn’t compare to the established ones on the market.  I think Voopoo have realised this and have now instead looked to releasing a brand new design that offers to bring both performance and vape quality.  Does the Maat (middle adjustable airflow tank if you were wondering) tank finally deliver what the Uforce threatened to do?  Before we get talking about it, let’s jump into the details first of all. 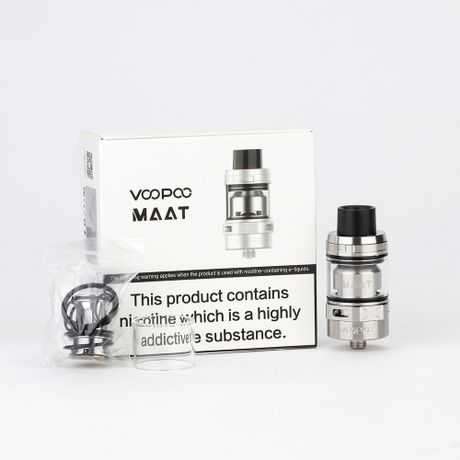 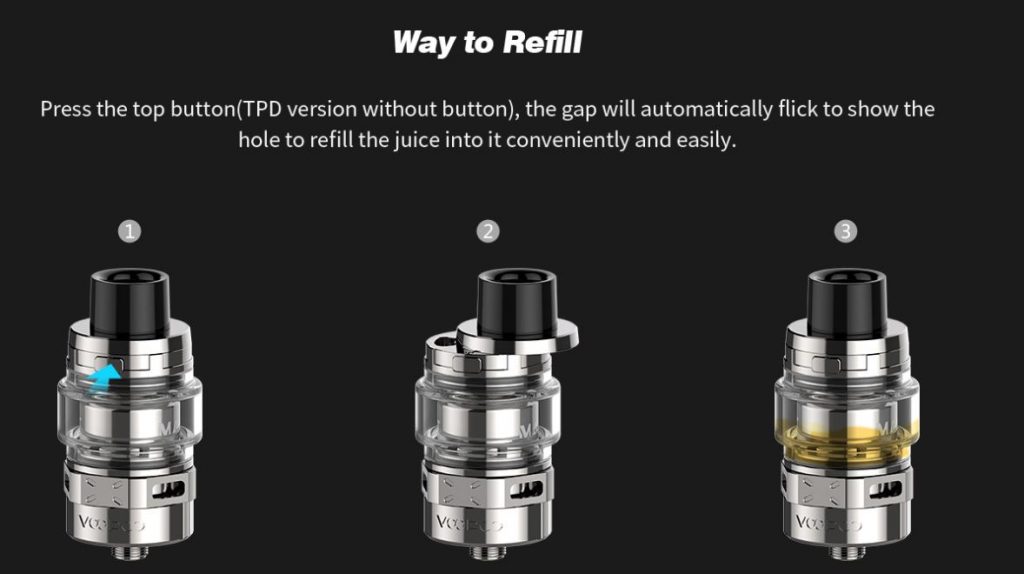 About the Voopoo Maat

The Maat tank is a 4mil capacity tank that aims to bring middle adjustable airflow to a stock coil tank system.  The tank comes with a replaceable 810 drip tip on top and bottom adjustable airflow that works with the base cap to bring airflow from the middle.  The tank has a push in coil system that slots into place to form a sealed connection to prevent leaking.  The tank has a top fill hole that is released with a hidden button on the top design of the tank.  The button releases a slide top revealing a fill hole underneath.  The tank comes with 2 coils, a M1 (0.13 ohm 60-85w) single mesh coil and a M2 (0.2 ohm 55-80w) dual mesh coil.

The little additional feature the tank comes with is an internal juice well that is designed to prevent dry hits.  It keeps a small amount if juice within the inner chamber of the tank so when the tank runs empty it will give that little bit more to saturate the coils before filling. 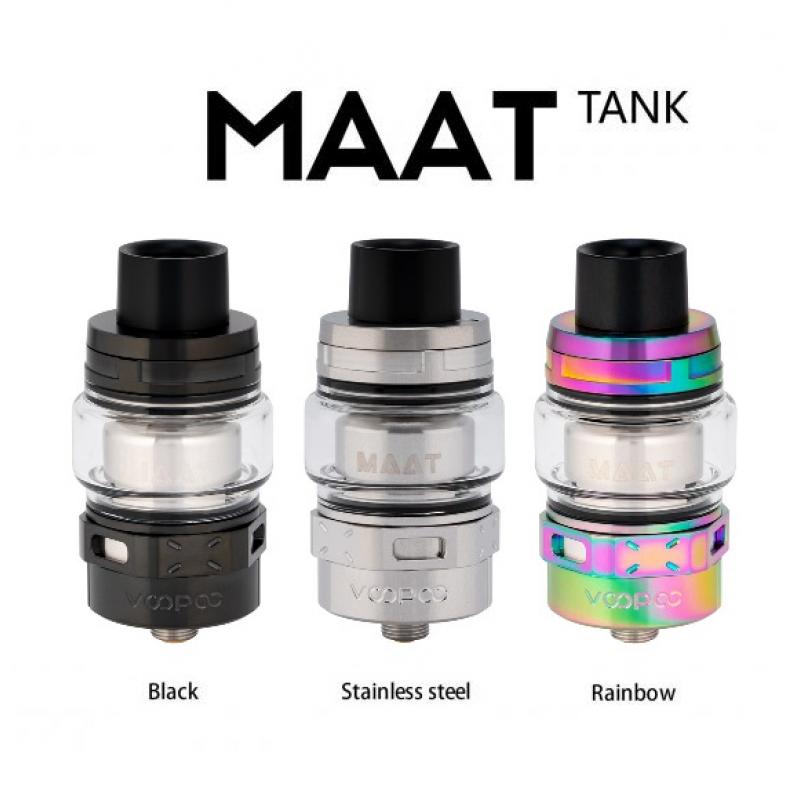 So where to begin with the Maat?  Design wise it is very much quite a different looking tank on the market with the metallic body and bubbled glass forming a rectangular design.  The wider bottom with the shorter top, the Maat certainly does prove to be a huge difference to the former standard looking Uforce T2.  The build quality however is excellent, with the tank feeling solid and industrial compared to other tanks on the market.  From this design the tank vapes very cleanly, which is a strange thing to say I know.  The airflow combined with the metallic design just gives a lovely smooth vape that feels very efficient and clean.  Flavour from the coils is pretty good, using fruit liquids in this I was getting the sharp fruits coming through the profiles and there was plenty of thorough flavour throughout both inhale and exhale.  Vapour production off both coils was pretty good, with a lot of cloud at the 70-75w range depending on the coils.  The top fill is nice and easy with the button being hidden, meaning no accidental openings within your pocket or bag and therefore no leaking from the top.

The hidden juice well is a nice touch and it certainly does work as intended, with no dry hits from the coils in regular use because of this.  It equates in my experience to around a mil of Eliquid give or take so plenty enough for a few hits before you really do have to fill it up.  Coil life is around 2 weeks I found before there was a sharp decline in performance but then that would be pretty average for any sub ohm tank on the market, especially when stressed under review conditions.  They performed well with sweet liquids and dessert without any drop in general performance. 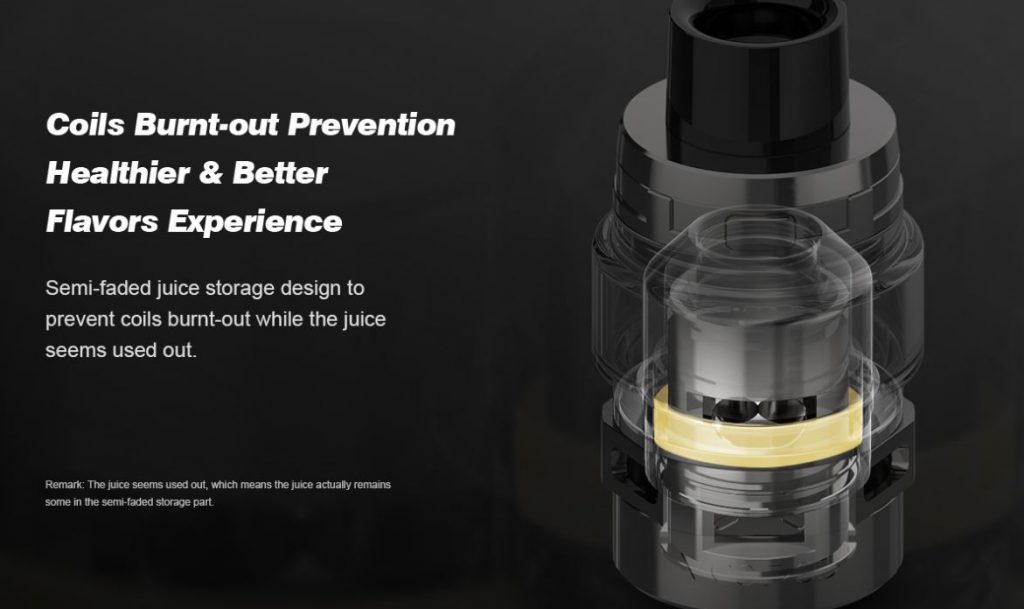 With such a bold and ambitious design, the MK1 version of this tank does not come without a few little niggles I found which do affect the overall performance and experience with the tank.

The first con I found was that occasionally the coil would start to struggle with wicking.  A simple fix was to re saturate the cotton and it would continue on as normal, with it not being a regular occurrence.  However there is something there preventing the wicking constantly but to be honest I cant quite put my finger on what It actually is.  The next con I found is that the top fill button could be difficult to press with bigger fingers, with it being based within the design rather than protruding.  Again not a major con but worth mentioning.  One thing that I found to be a minor annoyance was that it isn’t easy to change liquids with the almost leak resistant build of this tank.  This is also a pro for the Maat but overall I found it to be annoying more than anything.  I did get occasional leaking from the air holes as well, not a lot but enough to feel greasy upon touch.  I am not sure if that is down to the juice well overfilling for example when filling up the tank to begin with.  The final con for me is going to be the 4mil capacity, it feels nowhere near enough for the juice consumption which is a little faster than average. 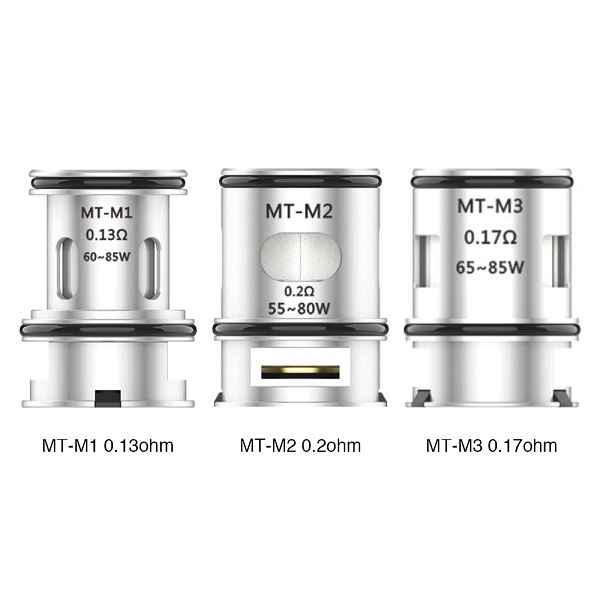 The Voopoo Maat tank is very hard to sum up because it is how you perceive it.  If you see it as a stand alone tank then it has plenty of work to do before it really stands out.  As a kit tank with the Alpha Zip, it actually is rather good.  It provides good vapour production, flavour and feels really well built.  The Uforce tanks never stood out but this one does in a big way and could well be a good option when compared to the other push in tanks released this year.  Is it good enough to seek out?  I have to say no, mainly because there are much better tanks on the market for flavour and juice consumption, BUT, if you pick it up with the alpha zip then you will honestly enjoy using the tank.

The Voopoo Maat may sit middle of the road for sub ohm tanks but as a kit tank, it could well rival any others on the market.

The Voopoo Maat may not be the best tank on the market by its own right, it very well be one of the best kit tanks on the market. Offering great flavour, vapour and paired with the excellent Alpha Zip, it is well worth picking this one up.

UK Vape Deals is the biggest UK Vaping deals blog website where the public find and list the cheapest & best Vape Deals, discount codes and vouchers for E-Liquid and vape products for May, 2020 from around the UK. All  the latest vaping deals in one place. UK Vape Deals does not sell products direct, each product is sold by various businesses that offer exclusive and non-exclusive deals. Please click on links at your own risk. Come and grab some Vape Bargains today.